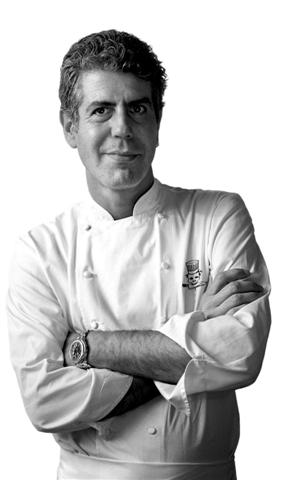 "If you're slower than me, stupider than me, and you taste good...tough shit, you're going to get eaten!"

A motto for omnivores everywhere, and just one more pearl of wisdom cast to us by chef, raconteur, and host of "No Reservations", Anthony Bourdain.

The take-no-prisoners author will be making a rare appearance at UCLA's Royce Hall on Wednesday, June 16th, fresh on the heels of his new book, Medium Raw: A Bloody Valentine to the World of Food and the People Who Cook, which will be released on June 8th.

Curious about the details of devouring a still-beating cobra heart? Wonder why they didn't make him eat balut in the Phillipines? Want to know what his essential travel item is? And which band is better, the Ramones or the Dead Boys?

Besides sharing stories of his life and travels, the presentation will include a question and answer session with the audience where all will be revealed.

We do have a few previews for you. Like what was up with that appearance on Yo Gabba Gabba!? He tells USA Today it was to assuage his daughter, Ariane's fear of doctors. Where is he hoping to go next? Bourdain told The Wall Street Journal he has been trying to get into Cuba " to watch Cuban baseball before it all changes..."

It's hard to believe it's only been ten years since Bourdain first hit the national radar with his explosive expose Kitchen Confidential: Adventures in the Culinary Underbelly, letting the diner know exactly what was going on behind those swinging doors.The book opens with a warning,

There will be horror stories. Heavy drinking, drugs, screwing in the dry-goods area, unappetizing industry-wide practices. Talking about why you probably shouldn't order fish on a Monday, why those who favor well-done get the scrapings from the bottom of the barrel, and why seafood frittata is not a wise brunch selection.... But I'm simply not going to deceive anybody about the life as I've seen it.

He followed up his bestselling debut with a series of books, both fiction and non-fiction, travel journals and a cookbook of recipes from the famed Les Halles. His newest memoir, Medium Raw: A Bloody Valentine to the World of Food and the People Who Cook, has received mixed reviews, particularly because of his foul mouth and vitriol, but isn't that the guilty pleasure in loving him?

It has been an interesting journey watching the jaundiced eye of this ex-dope fiend and punk rocker being opened to new ways of seeing over the last six seasons of No Reservations. But he is still that curmudgeonly misanthrope we can't resist, the man who dares to say what no one else has the cojones to admit.

And he doesn't seem to be slowing down. He hopes to do some writing for the HBO series Treme, which takes place in post-Katrina New Orleans. And I'm sure we can expect him to continue grumbling his way around the globe. As he says in the introduction to No Reservations, "I write, I travel, I eat, and I'm hungry for more."

(On this trip to LA, Tony, please eat at Animal. Order the Foie Gras with Biscuits and Maple Sausage Gravy and the Oxtail Poutine. You won't be sorry.)