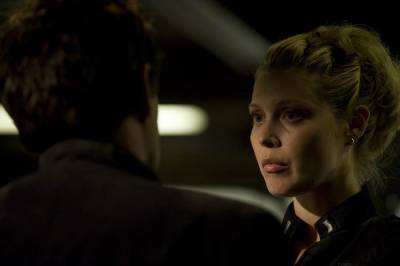 Alaina Huffman as Lt. Tamara "TJ" Johansen - photo credit: Carole Segal
Alaina Huffman (@alainahuffman) plays 1st Lt. Tamara "TJ" Johansen on the Syfy channel's hit series, "Stargate Universe" aka "SGU" to those in the know. You have also seen Huffman as the Black Canary in The CW's "Smallville" for the past couple seasons. Huffman splits her time between the Vancouver soundstage where "SGU" is shot and Los Angeles. We had a chance to check in with her before the upcoming season finale. "SGU" airs on Fridays on Syfy at 9pm and will resume next week.

The TV Junkie: Are you guys going to do ComicCon?

Alaina Huffman: Yes, absolutely, but I'm not quite sure if I'm going yet, we have such a huge cast, but I'd love to go if they invite me.

The TV Junkie: Over the course of working on "SGU" for a few seasons, has playing TJ changed you in any way?

Alaina Huffman: There's a lot of me in TJ which I can't say about all the characters I've portrayed. I think she's very vulnerable, in a good way, I think she's strong but she's not afraid to say that she doesn't know how to do something, and I am. That's something that I've learned, that it's OK to ask for help. By asking for that, you can get over it, I think I've learned that from TJ.

The TV Junkie: So you've had situations where you've had to "think like TJ" and ask for some help?

Alaina Huffman: Yes, especially in this last year, we're living in both countries because of the show, and I was pregnant last year, we now have 3 kids, so asking for help was a necessity.

The TV Junkie: How did the Winter Olympics affect the show?

Alaina Huffman: We had to push production since we would normally have started on the first of February but we pushed back to the 10th of March which worked out great for me since I was pregnant. Instead of a month and a half off after having the baby I ended up with 3 full months. I thought we would have had a chance to see the Olympics but I ended up just taking it easy.

The TV Junkie: Who from the cast have you learned the most from?

Alaina Huffman: Oh, that's a great question. I draw so much from them all individually. There is such a sense of respect among all the actors and we genuinely all enjoy each other's company and we actually hang out quite a bit, to the extent that last season one of the producers told us to take a break from each other, "you don't have to hang out with each other every weekend" - and we're like "really, because we really like to!" So we spent quite a bit of time with each other when we were back in LA.

That being said, Robert Carlyle is such a great actor, and such a character actor - you learn so much from him. He actually directed the first episode of season two, so I was really excited to work with him because I thought if I worked with him as a director I could understand how he works as an actor. Also, Louis Ferreira, he could not be further from his character, he is so funny and easy going and loving and genuine, he's really not that stuffy Colonel Young that he plays - he does all these character voices, he's very entertaining. Ming-Na, Elyse Levesque, are such stand-up people, they're so much fun to work with. They're all such a great group, I really draw from everyone.

The TV Junkie: Is Robert Carlyle that intense to work with?

Alaina Huffman: More than anything, he has an incredible presence - he just explodes on screen. I don't know how to explain it, you're just drawn to him.

The TV Junkie: Can you give us any hints about the finale?

Alaina Huffman: We've got the 3 part season finale, it will have some of the Stargate mythology in it, lots of stuff blowing up which will make some people very happy, and then lots of great character moments - we have a lot of big decisions to make and we're just not that sure of them.

"SGU" airs every Friday on Syfy at 9pm and will resume next week.