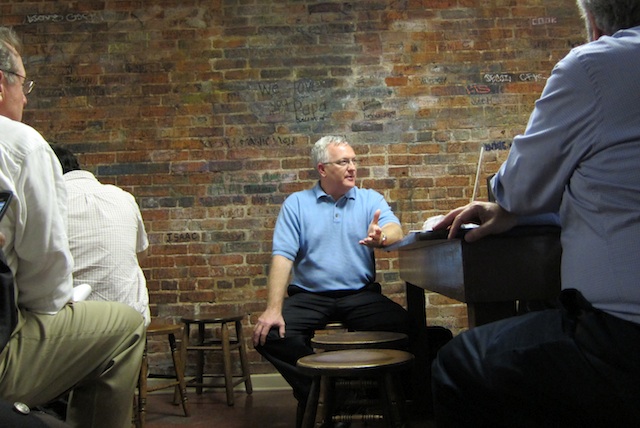 Metrolink's new CEO, John Fenton, is not a politician. He's a businessman to the core. And one with standards: efficiency, safety, the environment and serving people. Sure, he has vision for the commuter rail line, such as extending night service so people can use the train after Dodgers and Angeles games, but he also has a firm grasp of the economic reality behind those fun ideas — every government agency is clamping down on spending.

So what did the no-nonsense Fenton do within the first few days on the job? He instituted a simple policy that will save the agency an estimated $3 to $4 million a year. He noticed that engineers let trains run idle between routes, which to him was a big waste of money, and not to mention the pollution. So a new shut down policy was put in place and within two weeks, 93,000 gallons of gas were saved. "That's real money," he told a crowd at the Transit Coalition's monthly meeting on Tuesday night. "It's financially responsible and environmentally responsible." 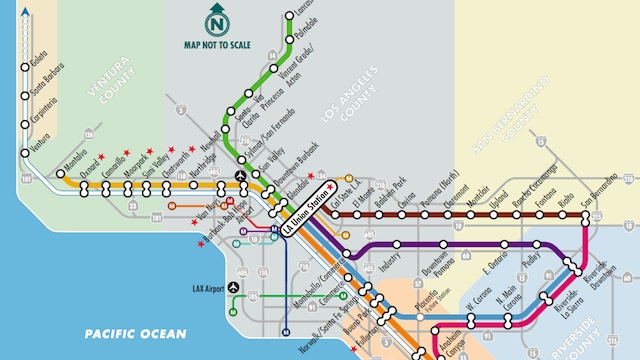 For Fenton, his job is also about changing the culture at Metrolink to be about the people they serve. During one of his first conference calls with upper management, he told them to hold on. He then sat there in silence for three minutes without any explanation. He then started talking again, explaining that he wanted them to feel what it is like to have a delay and have no idea what's going on -- typical transit experience, right? "That's not acceptable," said Fenton, who wants to focuses on what's right for the passengers.

"When you forget about the human element, you're going to fail," he continued. "We've got to create an experience where the customer says 'wow, I want to ride that.' Metrolink must be reliable and predictable."

Fenton, a USC graduate wit an extensive background in the freight train industry -- Metrolink is his 18th job -- believes that you have to manage detail in the transportation business. One of the best ways is to move performance by managing the bottom, not the top. One example is going after the worst train route for on-time performance on the map. The Antelope Valley Line, which serves downtown, Burbank, Glendale, the northeast Valley, Santa Clarita and the high desert, is the worst performing line in the system at 89%. "I was running box cars better than this," Fenton was quick to say in his Southern accent.

"The difference between freight and passenger [trains] is that you're hauling people, and that is the ultimate responsibility in my opinion," he explained. What Fenton wants is customer engagement, where a core group of employees focus on passenger needs, customer service and the challenge of growing ridership. He wants to create a customer advocacy group and hold listening sessions between himself and passengers to hear their gripes. 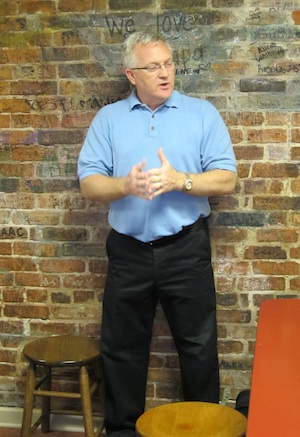 Photos by Zach Behrens/LAist
But part of making the customers happy is keeping a budget solvent and then growing it by saving money and smart capital projects. "If I can reduce operating cost, I don't have to increase fares. How do I make an investment that reduces my cost structure?"

Safety is another of Fenton's top priorities and Metrolink is the cause célèbre that has driven new national safety discussions and actions over the last couple years. Chatsworth "was the epicenter of change in the railroad industry," he said of the 2008 crash that killed 25 people and injured 125. "Not locally, nationally. Look at what happened from that one event."

While new safety technologies and laws are being deployed, Fenton knows that's only part of the solution. "You can have the latest technology, but you've got to have operators to operate those trains."

It's only been about six weeks since Fenton started the job, but he's already turning heads. The Transit Coalition's Executive Director Bart Reed said he was impressed at how he was already re-organizing Metrolink within the first few weeks. If Fenton keeps his short, but impactful run, the commuter rail agency is going to be a very different behemoth in a couple of years. L.A. should just hope that it gets to keep him around long enough to make those changes.