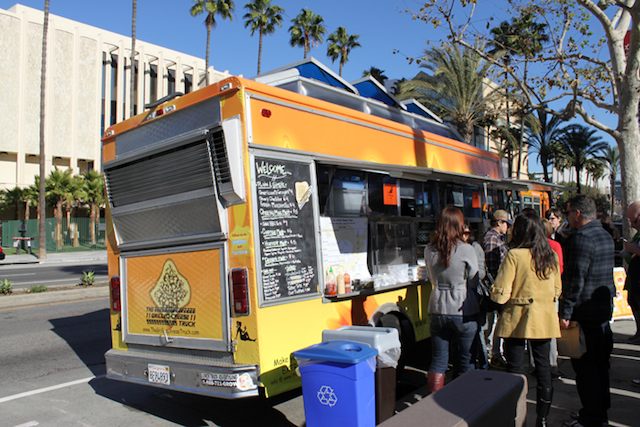 Photo by polaroid-girl via LAist Featured Photos on Flickr

Did food trucks aid in the death of three Wilshire Boulevard restaurants that shuttered over the last year? Or was it just bad food?

The 5700 block of Wilshire Boulevard, where office buildings on and nearby house Variety, E!, G4, SAG and other entertainment/media operations, last summer became ground zero for food truck controversy when an unofficial lunch truck row developed, pitting restaurant owners against the trucks. For office workers, it was a welcome change — writer Michael Schneider once called the area a "vast wasteland of lunchtime eateries." But that's not longer the case: today, for example, 11 food trucks served customers during the lunch hour.

But as the lunch truck row continued, some brick and mortar restaurants said goodbye. The latest was Koo Koo Roo, which shut its doors last week as part of its bankruptcy. Then, a few months ago, Organic to Go got going. Before that, it was Toshi's Fresh Asian that left. All three had terrible Yelp ratings. That leaves just three of the original restaurants -- Marie Callenders, Baja Fresh and Johnnie's NY Pizza. In March, Mixt Greens took over the Organic space and, for now, it looks like food trucks will continue to arrive bringing food that employees are happy with.

Previously: Food trucks endorse a candidate for neighborhood council with jurisdiction over 5700 Wilshire