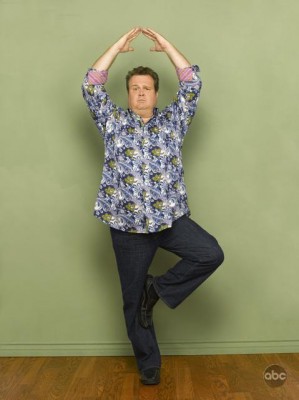 Eric Stonestreet is Cameron Tucker in ABC's "Modern Family" which has it's season finale tonight at 9pm. Be sure to check out our interview with Stonestreet at the end of the post. [Photo courtesy of ABC]
Yesterday we expressed our frustration with Versus' complete lack of content in Monday's broadcast of the Amgen Tour of California - we had deluded ourselves that things couldn't get any worse. Tuesday's broadcast of stage 3 from San Francisco to Santa Cruz started out great, beautiful footage of familiar roads and climbs, albeit without an attempt at an explanation for why no footage from stage 2 could be broadcast on Monday.

The race was going along well with the 3 podium finishers from last year's Tour of California in a breakaway after a stunning hill climb. As the race descended to Santa Cruz, with about 20 minutes to go, scrolling text appeared on the screen informing the viewer that the race was going to cutaway to an NHL playoff game. The race entered Santa Cruz with the breakaway of 3 just ahead of the pack and with less than 1 mile to go, approximately 60 seconds to the finish line, Versus cut away to pre-hockey match banter with a final comment to watch the finish on the Amgen Tour of California website where we went but video footage didn't seem to be available.

This poor decision was the equivalent of the infamous NFL "Heidi" game of 1968 where NBC decided to cutaway from a Jets-Vikings game with less than 65 seconds left to a made-for-TV childrens' movie called "Heidi". How much of a clown do you have to be to repeat one of the worst programming gaffes in history? With 5 days left of the Tour of California, we're watching just to see how much more badly Versus can screw this up. Various racers, including Lance Armstrong justifiably berated Versus on Twitter. If Universal Sports was available in more households, there might be an alternative to this network that doesn't know what it's doing. We've seen at least 2 other pre-emptings of scheduled cycling events in the last month with no explanation from the network - a network that wants viewers to cough up $28 for their Tour de France premium viewer application. No thanks.
—-
There are several season finales this evening, most notable is "Modern Family" at 9pm. Be sure to see the video interviews at the end of this post that we made at the Peabody Awards with series creator Steve Levitan, comedy legend Ed O'Neill, and the incredible Eric Stonestreet aka Cameron Tucker.
—-
The network upfronts continue with CBS announcing that it is axing 7 shows: "Cold Case," "Ghost Whisperer", "Numbers", "Miami Medical", "Accidentally on Purpose","The New Adventures of Old Christine" and "Gary Unmarried".
—-
The TV Junkie Plan: Tour of California, "The Good Guys", "Modern Family", "Dinner Impossible", "Chelsea Lately", Letterman (Russell Brand, "Lost" producers), Fallon (Jerry Seinfeld)

2:00pm Tour of California Versus - Stage 4 From San Jose to Modesto.

8:00pm America's Next Top Model The CW - Catfights and catch phrases are revealed in unseen footage from cycle 14.

10:00pm Dinner: Impossible Food - Chef Robert Irvine is lost in Hawaii on a mission to feed the cast and crew of the TV show, "Lost".