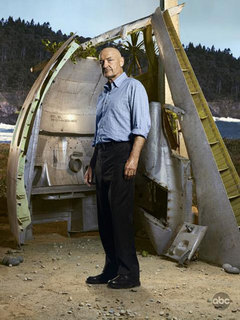 Locke will unveil a new strategy tonight that will set up the series finale this Sunday
In last night's penultimate episode of "24" we (finally) experienced some of the uncompromising action that made the series so exciting when it first debuted almost nine years ago. Now the stage has been set for next Monday's finale, it's official: it's Jack Bauer vs. the World. We're tuning into "Lost" tonight to see how they're setting up for Sunday's finale.
—-
Be sure to check out our report and interviews from yesterday's 69th Annual Peabody Awards at the historic Waldorf-Astoria Hotel in New York City.
—-
Yesterday's broadcast of the "Tour of California" was a failure as Versus was only able to show the field crossing the finish line in Santa Rosa due to rain that grounded helicopters and transmission planes. From what we could see, the rain didn't look that bad but maybe it was out on the course. Contrast that with the Giro d'Italia broadcast on Universal Sports which had no problem bringing us the program despite torrential rain in Italy with hub-deep water on the road in some spots. We just don't understand how we can get broadcasts of races in Europe that occur in highly mountainous terrain with rain, fog, snow, and ice, but it rains on a relatively flat stage in the Tour of California and we can't see it.

Perhaps there were technical issues, but we have a lack of understanding because Versus did an unacceptable job of explaining it to us. Also, the network made virtually no effort at all to present any other content other than to replay the previous day's stage. We could think of at least a half-dozen segments that Versus could have shot on the spot at the race finish that would have entertained and informed the audience, such as talking with the team mechanics about how they are going to clean-up and repair all those soaked bikes once they come in; talk to the team soigneurs and therapists about how they will help the athletes recover and recharge after coming in soaked from a stage that featured approximately 25 crashes on the course; etc.

Instead, we got a replayed stage with an occasional "update" from commentator Phil Liggett who told us nothing more than that they still couldn't bring us any footage. Have the producers not heard of cell phones? Call the team cars! Does no one on the Versus staff have a Flip? Go out and talk to whomever is on the team buses or people in the crowd that waited for hours in the rain to witness the finish line sprint. Yesterday was an example of a network that had neither a "Plan B" nor the ability to entertain and inform on the fly. A shameful embarrassment.
—-
Today you'll probably see a post here about what DVDs have been released but are you also aware that most of these releases are also available today via your cable box's "Movies On Demand" function? For example, today you can watch Valentine's Day, The Spy Next Door, and Invictus just to name a few. Keep checking the On Demand offerings of your cable provider and there's a good chance you won't even have to wait in the Netflix cue to watch just-released films.
—-
The TV Junkie Plan: Tour of California, "Lost", "Justified", "Chelsea Lately" (Bradley Whitford), Letterman (Jonah Hill, + illusionist), Fallon (Matthew Fox, Jane Lynch)

2:00pm Amgen Tour of California Versus - San Francisco to Santa Cruz. Let's hope they can bring us some footage today.

8:00pm The Biggest Loser NBC - Contestants and winners from past seasons cheer on the final four as they run a marathon; one contestant receives a visit from chef Curtis Stone.

8:00pm American Idol Fox - The top three finalists each perform two songs, one of their choosing and the other chosen by the judges.

9:00pm Frontline: The Wounded Platoon PBS/KCET - Some surviving members of Charlie Company's 3rd Platoon struggle with stress and injuries after returning from Iraq, while others fare well.

9:00pm Deadliest Catch Discovery - A boat-crippling passage stands between the Time Bandit and its final offload; a skipper risks mutiny in the hunt for a rare crab

10:00pm Justified FX - Raylan takes time away from his bodyguarding assignment to track down an old lead.

10:00pm 9 by Design Bravo - The couple take the children to London to promote the release of their new coffee table book.