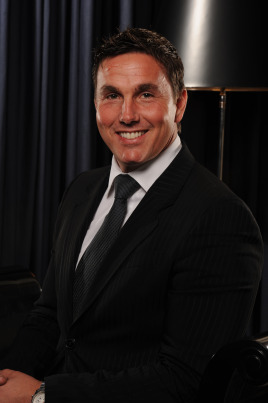 Today’s subject is Matt Erickson, the VP of Restaurant Operations at SBE.

As the role of entertainment has grown in mainstream culture in recent years, LA - the hub of entertainment - has seen a renaissance in arts, including museums, galleries, performance venues, and perhaps most decidedly, in the culinary arts. Restaurants in LA have stepped their game up, and one of the biggest players in that effort has been Sam Nazarian’s SBE, introducing restaurant brands like Katsuya, The Bazaar and XIV, partnering with creative forces like Philippe Starck, Michael Mina and José Andrés. And in charge of all operations and expansion for the SBE Restaurant Group, is Matt Erickson, who started as a bartender and worked his way to the top.

Captain of two of the three sports he played in High School and a Division 1 baseball player at Central Connecticut, Erickson broke his ankle senior year in college, ruining his chances of getting drafted to the Major Leagues. But while he didn’t grow up a hardcore chef, foodie or wine aficionado, the ability to lead a team that Matt learned from sports has been what made him a player in the restaurant business.

In addition to expanding the current offerings of SBE ventures in LA, Erickson’s next task is bringing the Katsuya brand national, spreading the taste of LA around the country, one Crispy Rice with Spicy Tuna at a time. We caught up with Erickson to find out his recipe for success, favorite LA menu items, how to get a reservation and best celebrity stories from the job.

1) As VP of Restaurant Operations at SBE, what is your role?
I oversee Operations of four Katsuya’s, XIV by Michael Mina, Gladstone’s, Hyde Mammoth, and Bazaar by Jose Andres. I have been with SBE since basically day one of its Restaurant Operations and have had the good fortune of opening every one of its Restaurants to date. This is a once in a lifetime opportunity that I do not take for granted. Opening super high profile Venues with someone like Sam Nazarian has been life-changing, to say the least.

I have an amazing team of managers and staff that I am extremely thankful for and love very much. It is this team that insures the restaurant group’s success more than anything else. I take a lot of pride in the kind of people we have working with us.

2) How did you land at SBE? What are some jobs you held prior to your current role?
I landed with SBE after moving from NYC where I spent nine years operating various nightclubs and restaurants including Ono, Centro-fly, and Abaya. I originally came out to LA on a trip to get some time away from NYC. By chance was made aware of SBE and its vision. It was such a compelling situation that I actually jumped on board as a bartender (the only position available at the time) due to the fact that I really felt SBE and Sam Nazarian were onto something special and innovative. Clearly, in retrospect, I had the good fortune of having made a wise decision following my heart and staying in LA. I consider myself extremely lucky and fortunate to be in the position that I am in.

3) What trends are you seeing in restaurants in LA?
Current trends- small plates, tapas style. A more social approach to dining if you will. Back to the idea of family style dining where the whole family shares several dishes. This encourages interaction, discussion, and allows the guest to sample many more items.

4) What’s your best celebrity story from your job?
Too many to list them all. Two that come to mind:
-- Quincy Jones, Chris Tucker, Naomi Campbell, Mary J Blige, Denzel Washington and Eddie Murphy all walking in to Katsuya Brentwood without reservations on a packed Friday night after the BET awards. Finding them a space to sit without waiting was an interesting challenge and an unforgettable sight.
-- Kobe Bryant, Jay Z, Ron Artest, Fergie, Kate Hudson, A-Rod, Will I Am, David Geffen and Jimmy Iovine all at one table at Katsuya LA Live after the Grammy’s.

5) What are your recommendations for ways to get a reservation at a hotspot on a busy night, when you don’t have any prior connections?
Shameless persistence.

6) What is your favorite menu item at an SBE restaurant?
Too many to choose - Tuna Tartar at XIV, Baked Crab Hand Roll at Katsuya for sure.

7) What's your favorite non-SBE dish in LA?
Any flatbread at Gjelina in Venice.