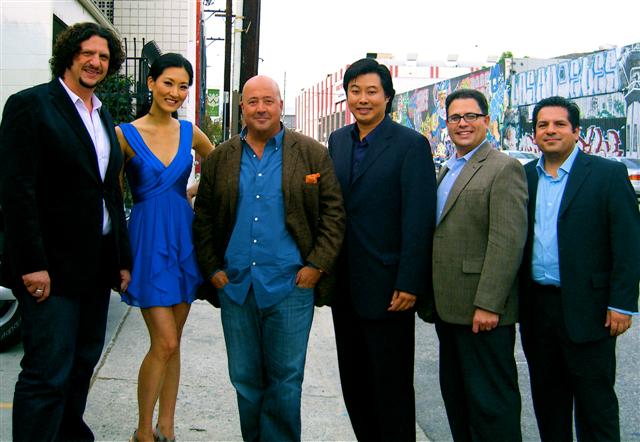 Eddie Lin is best known as being the local blogger for Deep End Dining. But tomorrow night Eddie and Bill Esparza of Street Gourmet LA will be guest judging Top Chef Masters. Throw in Andrew Zimmern and yeah, things are probably going to get creepy-crawly. There will be a viewing party at The Edison with Eddie and Bill from 9pm till 11:30pm in the Tesla Lounge and Generator Lounge. Top Chef Masters starts at 10pm. LAist had a little talk with Eddie, inventor of the peanut-butter and jellyfish sandwich.

How did you get hooked up with Top Chef Masters?
Andrew Zimmern of Bizarre Foods on The Travel Channel (who is also on the episode of TCM) recommended me to the producers of TCM. (Andrew had me as a guest on his Bizarre Foods show when he visited LA.) Then a TCM producer contacted me and asked me to be on the show. I subsequently recommended some picks for fellow judges and they picked two people from my list. Bill and Marc Moss, co-founder of Weird Food Festival.

How long does it actually take to tape?
Our judging segment took roughly 3 to 4 hours, pretty long and thorough considering it will be cut down to only a few minutes.

Any amusing on set stories?
We were served wine before the shoot and during the shoot. Lots of it! We get faster and looser as the show progresses. I wish there was a director's cut or an unedited version of the show!

Were the other judges squeamish about the food?
You'll have to watch the show.

How did you end up "on the deep end"
I grew up in the "deep end". My mom served me steamed pig brains when I was 6 in La Mirada and I've never looked back. It's like being a vampire, once you get a taste, it's on!

Well, your daughters are cute. I can see how it would be tempting.

And there you have it, the final taboo -- crossed on LAist! Join Eddie and Bill Esparza at the Edison tomorrow night. If you can't make it, be sure to tune in on Bravo at 10pm PST!!!