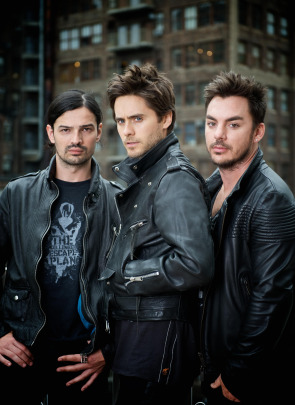 Jared and his multi-platinum band, Thirty Seconds to Mars, are bringing their Into the Wild tour to town with stops at the Santa Barbara Bowl on Friday and The Greek on Saturday.

Leto, who has appeared in films like Fight Club and Requiem for a Dream, founded the band alongside his brother Shannon. Their self-titled debut album was released in 2002. The follow-up, A Beautiful Lie, earned multi-platinum status.

With their most recent release, This is War, the band took fan interaction to new heights with the innovative "Faces of Mars" campaign — 2,000 different album covers featuring photos of friends, fans, musicians, artists and other notable people like Conan O'Brien. The album's lead single “Kings & Queens” recently spent 3 weeks at #1 and on the alternative playlist charts.

LAist had the chance to exchange emails with Leto who filled us in on playing in front of the LA fans, having a brother for a bandmate, the relationship the band has with its fans, Kanye West and much more.

1) You're currently touring across the country, as an LA-based band what do you enjoy most about playing shows at home, like your upcoming show at The Greek?
Seeing friends and family and playing in front of your home crowd is always great. Esp when you are away running around the world as much as we are. I've been living in Los Angeles for years now and there's a reason why people come there to fulfill their dreams. LA isn't just the city of angels its the city of dreams.

2) What can fans expect to see from a MARS show on this tour?
A bit of chaos, a lot fun, and an unforgettable night. We have some surprises in store so expect the unexpected...

3) Prior to the release of your latest album, "This is War" you gathered a 1,000 of your fans at the Avalon, for what you called "The Summit" allowing your fans to be a part of the recording of the album.Do you think there are other ways you can break the boundaries between the band and your fans?
Our 'fans', for lack of a better term, are more to us than just that - they're like a big extended family. After the Summit in Los Angeles we extended it to 9 different countries and then to the world with the digital (online) summit. We also did the Faces of Mars where we put 2000 different faces on album covers and we've now extended that where you can take a photo at the Faces of Mars booth during the show for an upcoming project. We also have a brick and mortar location, a Mars Headquarters, called The Hive where you can come in and learn more about the band, participate in events and volunteer.

4) In the current state of the music industry, do you think this personal connection along with the fans is more important than it might have been 10-20 years ago?
I think a personal connection has always been important to Thirty Seconds to Mars. From the beginning we've had a very special relationship with our family of friends and fans around the world. I think it's become easier to connect with people with sites like MySpace or Facebook or Twitter. That allows us a more immediate conversation. We've had a message board and website since 98/99 and its served us well.

5) What's the best thing about having your brother as a bandmate? What's the worst?
My brother is a phenomenal musician and honestly, if he wasn't my brother I'd still want to be in a band with him. Shannon has an amazing energy on stage and puts on a great show every night. We do have our disagreements but they never last too long.

6) What was your reaction when you learned that Kanye West's contribution to the single "Hurricane" would not be included on the album? Are you happy that track was released online?
I wrote Hurricane in late 2007 in Berlin and it was always intended to have 2 versions. Kanye and I met and he asked me to direct a music video for him. Although that didn't work, we still talked about collaborating and I went to Hawaii, where he was making his album, and had him sing on the track. There’s always some back and forth with labels but I believe you'll hear the official version soon

7) What's next for you and the band?
We just started our North American leg of the Into the Wild tour, then we'll go back to Europe for the summer and we just announced our dates in Australia and New Zealand. We're busy!