LA Noir UnScripted: Whodunit? Not Even ImproTheatre Knows Until They Do It 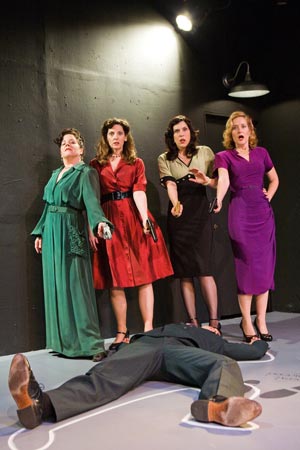 Some of the cast of ImproTheatre's LA Noir Unscripted (Photo by Blake Gardener/Courtesy ImproTheatre)
Without a good script, the hallmarks of really good film noir don't have a leg to stand on. The archetype characters and suspenseful plot as presented on the page give actors and directors the material to create intrigue and excitement. So what happens when those pages are blank?

One of Los Angeles' premiere longform improv troupes, ImproTheatre, faces that very dilemma—or rather challenge, with every performance of their brilliant new stage enterprise, LA Noir UnScripted. The rotating cast of talented improvisers, many of whom you've seen in film and television, embark on a delightful and surprising journey into the darkest corners of the mean city—and their own minds—in a show that is running now through June 13th at Theatre Asylum in Hollywood.

When the lights come up in the small theatre, the evening's cast marches onto the stage for a lineup, and have only their costumes, a bare bones noir-esque set, and the giggle-worthy taped body outlines on the stage floor, to give them any sense of character. Relying on the audience's suggestion of both a locale from Los Angeles in the 1940s and an object (in the show I saw, it was Larchmont and a piano) they dive headlong into a two-act performance guided by instinct, talent, and their collective savvy of the genre.

What ensues is a clever romp through the trenches of noir's beloved conventions, as the admirably skilled actors riff off each other, embracing fumbles and twists into the ad hoc plot and remarkably create a net that not only keeps the entire cast afloat, but manages to weave the strands of a complex mystery from conflict to resolution by the time the show must come to an end. That may sound dire and serious, but you would never know that from where you sit in your chair; ImproTheatre's performers seem uncannily calm...and are uncannily hilarious.

The strengths of LA Noir UnScripted rest firmly in the ability of all of the performers to embrace character with full abandon and no self-consciousness. For the evening I was in attendance I was charmed by a doe-eyed ingenue with a secret tarty past (Kari Coleman), a troubled and manipulated wife of a miscreant (Tracy Burns), a dope-sick jazz-playing nincompoop (Brian Lohmann), a slick con-artist named Hamilton Hamilton (Stephen Kearin), a greasy partner cop (Brian Jones), a widower and smooth police detective (Dan O'Connor) and a brassy, smart-mouthed broad-on-the-side (Edi Patterson) who ran the gamut of the genre from heart-pounding chases down narrow streets to paddle-boating on the lake at Echo Park (complete with quacking ducks) to a shoot-out in a seedy nightclub.

Whether you are a die hard noir enthusiast or just enjoy smart and funny theatre, the amount of study these performers put into their work is not only evident, but also deserves appreciation. The show program includes notes from director Brian Lohmann, who details their approach to the project and the extensive research each of the actors went through in order to take on the film noir genre impromptu. They read books, like the stories of Dashiell Hammett and Raymond Chandler, watched an impressive collection of films, and explored themes and tensions in their rehearsals.

Seeing a show like LA Noir UnScripted (and in recent years another successful venture of ImproTheatre's, Jane Austen UnScripted) will have you laughing at the off-the-cuff oddball humor improv often elicits, then marveling at how the actors go from a blank slate to full performance without hardly skipping a beat.

You may, in fact, be so inspired that you want to stand up and give it a go yourself. This is not one of those improvised shows, though, where you'll get brought up on stage and wittily serenaded or roped into a game. But if you feel bitten by the improv bug, ImproTheatre offers classes for all skill levels taught by cast members, and LA Noir UnScripted's director Lohmann is prepping to offer a workshop in the very same genre. Information about their classes is available online.

LA Noir UnScripted is performed Fridays and Saturdays at 8 p.m. and Sundays at 7 p.m. and runs through June 13th. Tickets are $20 and can be purchased online.