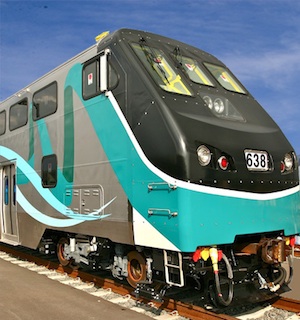 Metrolink today is previewing one of their new 117 Crash Energy Management (CEM)-enabled cars. After the deadly 2005 Metrolink crash in Glendale that left 11 dead, officials began looking into safer cars. The 2008 crash that left 25 dead in Chatsworth only reemphasized that need for safety.

The cars are supposedly reduce the impact with "unique collision-absorption technology" and are a first for the country, which is garnering praise from federal officials. Other safety features the agency is rolling out include monitoring engineers with a camera and installing positive train control, a GPS technology that can prevent trains from colliding into each other.

This morning, a media preview will take place in Colton, where the Korean-made trains will be assembled in hopes of deploying them in the fall. The cars were originally proposed to be made in Los Angeles, bringing in 200 jobs (.pdf), but the plan was scrapped because the space needed was to be turned into a park. The public will be able to check out the cars in San Bernardino and Union Station May 8th, which happens to be National Train Day.