Aqua the Winning Color in Race for Naming the Expo Line 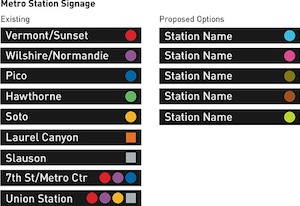 Metro uses colors to name and define its major lines so it goes without saying that what we call the Expo Line today will soon become the Aqua, Pink, Olive or some other hued line when a portion of it opens this year.

Aqua has been the preferred color for some time, but there have been detractors. In 2006, Councilman Bernard Parks tried to derail the aqua color in lieu or gray or rose. Aqua seemed to define the end of the line at the ocean, but nothing between. Rose, at least, matched the Rose Garden in Exposition Park.

Metro last Friday posted an informal poll on their blog asking for readers' choice (you can still vote!)--so far, Aqua is winning by a lot. Pink comes in second, but is also a popular choice for the proposed West Hollywood spur of the Westside Subway extension area. Bronze and copper round out the top four.

In the end, name it what you will, just finish the damn thing.