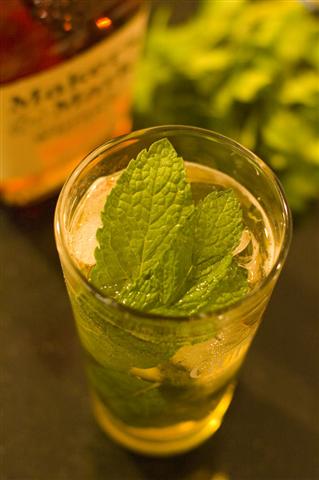 Wearing spectacular hats and drinking hard liquor? This is definitely our sport! And the Kentucky Derby, the first leg of the triple crown, is the genteel matron of them all. Just because we are not heading to the Derby doesn't mean we can't wear big hats and Colonel Sanders ties and get plastered like the proper Southerners do. Allow LAist to guide you through the local events, the latest news from the track and the art of mixing the perfect Mint Julep.

Where better to watch a race than at a racetrack? Fans can place bets and watch the Derby at Santa Anita. You can also watch the Derby from the comfort of the racetrack's Frontrunner Restaurant, which boasts a 215 foot long bar. Reservations for the Frontrunner are required.

Hollywood Park in Ingelwood opens its doors for the live telecast at 7am. That's right, 7am. If you want to pick up vices you've got to start early. Live races start at Hollywood Park with a special first post at 11am. The Turf Club offers a $45 buffet, but we suggest crossing Century Boulevard at Prairie and heading east to Bertha's for some serious soul food (Warning: music plays when you click the link, but the song is kind of worth making the whole office stare at you).

Matt Denny's Ale House Restaurant is another Arcadia location for watching the race. They will have the entire race card from Churchill Downs and will be serving $5 Mint Juleps. Their menu is heavy on the bar fare with a wide variety of salads, sandwiches and grilled dishes as well,

And now, more from Jimmy at the sports desk:

The 136th running of the Kentucky Derby is set for Saturday afternoon, and despite favorite Eskendereya being scratched with swelling to his leg there are plenty of storylines to go around.

The 3-1 favorite Lookin At Lucky is trained locally at Santa Anita Park by hall of fame trainer Bob Baffert who won the Derby in 1997, 1998 and 2002. However Lookin At Lucky came in a disappointing third in the Santa Anita Derby where he started from the rail position - the same position he holds for the Derby.

Another notable Southern California horse is Make Music For Me, a 50-1 long shot racing the ninth position. Trainer Alexis Barba is looking to be the first female trainer to win the Derby, however Make Music For Me just squeaked into the field thanks to injuries to two other horses.

This brings us to another 50-1 long shot in the field Homeboykris. Trained by Richard Dutrow, Jr. and co-owned by Dodgers’ manager Joe Torre, there will be a lot of interest to the race in the Dodger clubhouse. While Torre won’t be able to be at race, his wife and family will represent him well at Churchill Downs.

Now let's get you something to drink. Mint Juleps have been the official drink of the Derby for 73 years. And if you want to do it right, Early Times is the official whiskey.

Make a simple syrup by boiling sugar and water together for five minutes. Cool and place in a covered container with eight sprigs of fresh mint. Refrigerate overnight. Make each julep, one at a time. Fill cup or glass with crushed ice, add one tablespoon mint syrup and two oz whiskey. Stir rapidly with a bar spoon to frost the outside of the cup. Garnish with fresh mint.

The Santa Anita Racetrack also has its own signature drink

Fill a cocktail shaker halfway with ice. Add bourbon, egg white, lemon juice, and simple syrup and shake vigorously for 10 to 15 seconds. Pour into a cocktail glass, top with bitters, and serve.

Here are a few traditional Kentucky Derby recipes if you want to go all out.

Louisville's Brown Hotel is said to have originated this hot sandwich. According to The Beaumont Inn, "Many variations can be found, most commonly country ham is added and a cheddar sauce is substituted. This is our version which I feel is closer to the original recipe. It is offered on our lunch menu."

Heat butter and add flour. Whisk and slowly cook for 5 minutes. Whisk in cream and milk and heat. Whisk in cheese until melted. Season. Simmer for 30 minutes. Sauce should be very thick.
Quarter toast and place in an oven safe dish. Top with turkey and tomatoes. Cover well with sauce. Bake at 400° for 10 minutes. Garnish with bacon.

Thanks to KatieF at www.roadfood.com for contributing her mother's recipe:

Simmer the chicken in seasoned boiling water until tender. Remove chicken from bones and dice. Return chicken pot with broth.
Add all ingredients except corn, nutmeg and lemon juice. Add enough liquid to cover. Cook until mixture begins to thicken but is still soupy. This will take a couple of hours. Add corn towards end of cooking time.
Season with lemon juice, and nutmeg. Serve over rice with tabasco sauce.

This one is from Stacky5 at www.recipezaar.com. They are hesitant to call it "Derby Pie" but believe it to be the original.