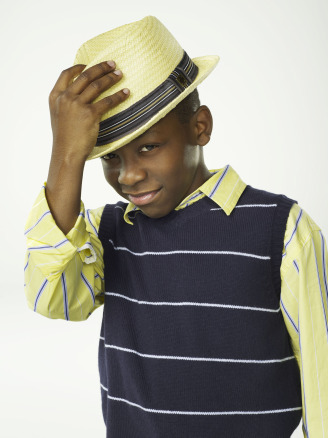 Bobb'e J. shared both the small and big screen with some of the biggest stars in town, hosted his own TV show and was nominated for an MTV Movie Award all before he was old enough to have a driver's license. Thompson, who still isn't old enough to drive, broke through with his scene stealing performance in the hit comedy, Role Models. The actor/rapper's career, which began at age five, includes roles in "The Tracy Morgan Show," "Human Giant," Idlewild, Fred Claus and Land of the Lost.

The 14 year-old who lives outside of Los Angeles has teamed up with a group of teen filmmakers for the Reese's Puffs Extraordinary Cinema program, a contest that gave teenagers nationwide a chance to get their big break in Hollywood. Thompson stars in the film “K-RUN Radio,” which is going head-to-head with “Gloria,” starring Dominic Monaghan ("LOST," "FlashForward"). Both films can be seen on Fresh-Films.com — the home of Fresh Films, the nation’s top filmmaking program for teens.

The films were created by two all-teen crews who were flown out during spring break and replaced the pros on set, coordinating every aspect of film production from story development to casting, to shooting and editing their films. The makers of the winning film will receive $9,000 in scholarships (to be divided equally between the winning team). Voting ends May 3rd.

LAist had the chance to talk to Bobb'e J. who filled us in on why we should vote for his video, who his favorite co-star is, where we can see him next and much more.

1) Why should people vote for your short film?
Because it's Bobbe' J! Either way, whoever wins I'm happy for whichever crew wins the scholarships. But, I would like to remind everyone that my short film was 100 percent teen -- from actors, to directors and so on.

2) What impressed you about the teens you worked with?
How professional they were. It made me feel like I was with adults but at the same time with teens because of their professionalism on the set but were still able to have fun as teens with another teen on the set. I'd love to work with these teens again.

3) You've worked with some great actors. Who would you say has been your favorite co-star?
Tracy Morgan. I love working with Tracy because of his comedic timing and there's so much to learn from him.

6) Outside of acting, what are some other things you're interested in?
I play football and I'm rapper. Music is a big part of my life. That is what I'd like to some day branch into.
How would you describe your rapping style?
I'm kind of in my own lane. I try not to be like other rappers. I think outside the box and try to be as different as possible so people don't compare me to other rappers.

7) What's next for you?
First and foremost I got to stay on point with school. I got a movie coming out called Snowmen with Ray Liota, which is a drama. That's one of my first dramas. Other than that I got lots of meetings. Meetings, meetings, meetings and more meetings. I'm also playing Tracy Jr. on "30 Rock," that's a reoccurring role.