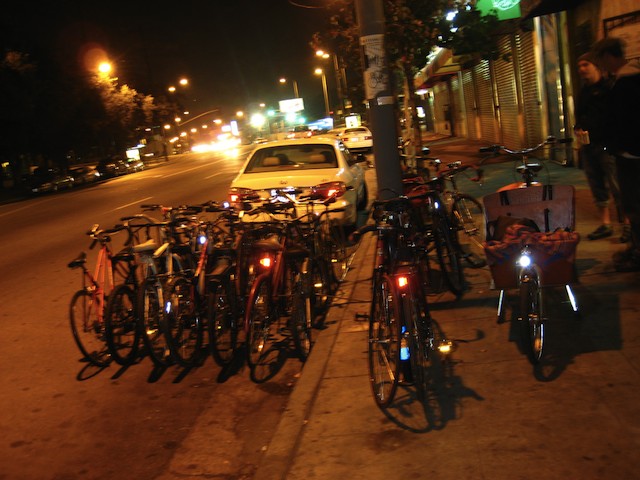 Los Angeles will finally get a bicycle corral, thanks to a unanimous vote by the City Council this afternoon. A pilot project funded by the business community and local neighborhood council, the corral will hold up to 20 bicycles in front of Cafe de Leche on York Boulevard at Avenue 50.

"We expect that this will be a success and that people will want to have" corrals in their neighborhoods, said Councilman Jose Huizar, who wrote the motion. "Hopefully the Department of Transportation could find additional funds should we expand this... When you make it more convenient, both for businesses and customers alike, that's when people are going to start using bicycles more often."

Councilmember Bill Rosendahl, who heads up the city's Transportation Committee, exclaimed he was shocked that this was going to be the city's first one. "Let's just hope it's the beginning of these corrals throughout the city," he said, noting that he looks forward to parking his bike in a corral on Venice Boulevard in the future. "This is a new day for us in the city of Los Angeles. Finally, bicycling is getting the respect, at least at that spot."

Huizar thanked the bicycling community for making the corral a reality. "It is through your activism, advocacy and involvement that we've been able to do this."