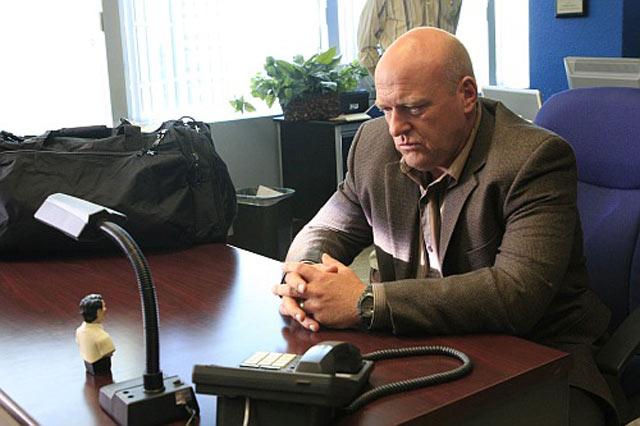 Dean Norris is currently thrilling us as ultra-macho DEA agent Hank Schrader on AMC's "Breaking Bad" but we've been watching this great actor for over 25 years. From "N.Y.P.D. Blue" to the "X-Files" to "The Unit" and beyond, Dean Norris has just kept popping up so we've been very pleased to get so much of him so regularly in "Breaking Bad". Norris' character, Hank, has gone through some drastic changes, as most of the characters have, he's gone from a comic element, the jovial macho guy, to a panic attack-stricken paranoid. Hank is so real and exciting, it's been a great, if not nail-biting journey. Tonight's episode of "Breaking Bad" will very much feature Hank so be sure to tune in at 10pm.

LAist: You have such a storied career, starting way back on "The Equalizer" with Edward Woodward.

Dean Norris: "The Equalizer" was my very first show, that's how I got my SAG card. That was literally my first audition in New York City, I was living on somebody's couch - for $200 a month I had a couch and a suitcase and my agent sent me out to try that on a lark and I got it. I just had a couple lines but for me the fact was that I was getting my first job as a professional actor which is always a tough nut to crack.

LAist: We're also familiar with your roles on "West Wing", "Tremors", and "24" and now you've got the great role of Hank on "Breaking Bad"

Dean Norris: This is the dream job come true from an acting point of view. Going to work on that set everyday is such a joy, these scenes are theatrical and cinematic. I view cable TV now as our new alternative cinema, that's what it's become. We are getting to play characters of depth and detail that you would see in an incredibly written play or independent film.

All the elements you associate with great film are in "Breaking Bad", from the music to the cinematography, you just don't see this kind of work many other places.

LAist: How has it been working with Bryan Cranston as a director on some of these episodes?

Dean Norris: He's been great, I can't say enough good things about Bryan Cranston. He's improved my acting just by being around him. He's the leader of our show so him being a director fits right in. He's a great ambassador of our show, he sets the tone, he comes to work to do his best at all times, every time, and I think we're all happy to work for him.

LAist: Can we talk a bit about your character, Hank Schrader? It seemed like in the first season he was kind of just a jovial, bumbling DEA agent, but halfway through last season he started changing and there's very little "funny" about Hank. What's it been like going through this metamorphosis with him - to go from comedic to very dark?

Dean Norris: It's been incredible from an acting point of view. We took a reliable source for a laugh which was Hank, and we've pushed him into this whole other thing. They are taking these characters and just tearing them up. The audience thought he was a one-line joke and are forcing them to look at his dark side, and the complexity of his soul.

I think the armor that he puts on, and everybody puts on different armor depending on their job, but particularly law enforcement, the kind of armor that you have to put on to deal with the daily stresses and bad guys and bullshit is not uncommon that it's going to be real macho or otherwise you are going to get eaten alive. But rarely does a television show go to the other side of that because it might appear to be too wimpy, but I'm so glad we've done it because it's so real, it's a truthful exploration of the dark side of this person and it's a real pleasure to participate in this. I love it.

I thought we've been successful and artful in showing that Hank is an intelligent DEA-guy, he's been a buffoon, but he's putting the pieces together. So it's not that he's a bad DEA agent, he's just had some personality traits that were issues but he's on the right track. It's funny because in the pilot scripts they had him with a bit of a racist touch with his partner "Gomey" (Gomez) and his "bean-speak", which would have made it even more difficult to make him a halfway-likable character. But they steered away from that and took it out.

LAist: I think the last time we could have had a laugh at Hank's expense was when he overprimed his homebrew and in his paranoia he thought it was gunshots and he nearly shot his own wife. It seems like now his obsession with the mythical "Heisenberg" would mean that if he's not successful in tracking him down it means the end of everything for him: his career, his relationship with his wife, his mental stability.

Dean Norris: He's raised the stakes, he's given everything up in pursuit of this Great White Whale of Heisenberg. It's driving him crazy.

LAist: They are in this desolate place, this wasteland of scrub waves and sand dunes with the whale breaching off in the distance.

Dean Norris: Right! A really interesting way of thinking about his situation.

LAist: What else can we look for you in?

Dean Norris: I've just been working on some other TV shows, I did a "Medium", will do a "Lie to Me", and I have a couple movies that I might be able to do this summer.

LAist: Is there a show that you'd like to be on?

Dean Norris: I'd love to be on the FX shows but they have a policy of not casting anybody who is a regular on another network's shows.

LAist: That's their loss then.

Dean Norris: [Laughs] Until either "Breaking Bad" is done or they change the policy.