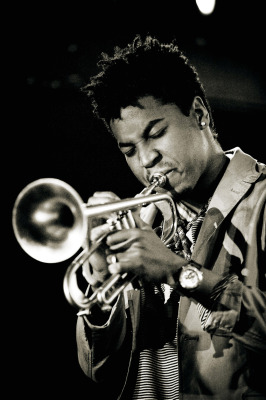 When we last spoke with the 27 year-old trumpet phenom who has garnered Grammy nominations, countless accolades and numerous appearances on the big screen he was in town performing at the Catalina Jazz Club.

Less than two years later, the New Orleans-bred musician returns to Los Angeles to perform two shows, a free show today at Amoeba Records (5pm) and Tuesday at The Roxy.

We caught up with Scott, who just recently released his latest album, Yesterday You Said Tomorrow, in the lobby of the brand new W Hollywood.

Scott schooled us on his approach to this latest album, taking it back to the 1960s. He also gave us some insight into his relationship with fellow New Orleanian trumpeter Wynton Marsalis, as well as his decision to cover Thom Yorke.

Scott also gives us his take on Treme, the new show created by David Simon about his hometown, as well as his connection to the show. 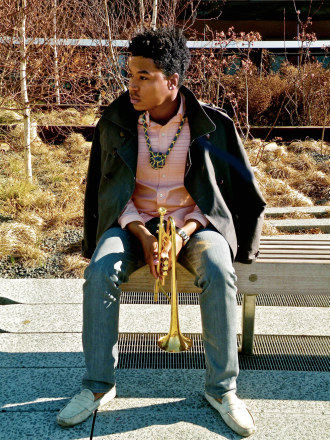 1) Why did you decide to bring your show to the Roxy rather than a jazz club?
I’ve played in the Roxy before and I feel like there’s a very special vibe in the room. I like being in the position where you can capture something that people are willing to accept. There’s a feeling in that room that whoever’s there is expecting to leave that experience with something great. Whereas, I feel like when people come to most jazz clubs they don’t have that feeling. I rather play for people who are open to that. For American audiences, it’s not something heavily prevalent here, people go to see music. I feel like the Roxy is one of the places where you get the chance to play for a group of people who came to hear music.

2) What inspired you to take back to the 1960s for this album?
That was really the last period of time when acoustically it felt like there was a very creative period of music and people were unwilling to relinquish their own sincerity for musical purposes. I feel like today’s musicians are pretty insincere. Even in the school systems how kids are taught to play music, it’s always a means to end. You’re taught to play music so you can be a rock star not because you’re sad and music can help you purge something. Where I’m from, music is a part of every aspect of my life. In my culture, there’s a song for everything. There’s a song for life. There’s a song for death. You’re not taught music in that same way. I noticed that was something that doesn’t exist on a huge level in America. I see it in other countries.

I wanted to make sure that I illuminated the fact that we (Americans) have a history of doing that. It is a part of our own canon to speak your mind. It is a part of our canon to make music that is sincere about your own experience and not really give a damn about how people are going to react to it.

I feel that’s a very American thing to do, which is the one thing that is actually different from other places. In other countries, they may make sincere music about their feelings to a degree but there’s certain boundaries they’re not going to cross. In America we can say what we want. I think that there’s a lot of stuff that needs to be said about our experience.

3) Does it surprise you that more musicians aren’t saying anything?
It’s very surprising. Today’s jazz musician seems to be completely unconcerned with that. I don’t know how that happened or why that happened but that seems to be the case.

They’re more concerned with writing music about how light hit a car window that had specks of rain on it -- these ethereal ideas. Meanwhile there are people starving, there are people that don’t have rights. There’s lots of meaningful stuff to write about.

I understand a lot of jazz musicians haven’t really seen or experienced any of this. In that regard, I can understand why they’re not writing about it. Historically, people who have played this music have typically been from harder situations than most. I think the music’s history is like that. Dizzy Gillespie had a bad time in Georgia he was writing “I’ll Never go back to Georgia.”

Most jazz musicians today are academics which is not a negative thing, I think most people would conclude that I’m an academic per my pedigree, but they’re solely that. I’m not saying you need to witness genocide to write music but if some shit hurt your feelings or if you saw something that you thought you could change, why not write about it?

4) It’s well documented that you and fellow New Orleans trumpet player, Wynton Marsalis, don’t see eye-to-eye. Actually, when I saw you perform last time you were in town at the Catalina in 2008, you mentioned him on stage which received a bit of a reaction from the audience. Do you and Wynton speak much?
I’ve spoken to him, it’s been a little while maybe six or seven months. We have a good rapport. It’s strange because I know if I see him right now and he knows that I’ve been saying what I’ve been saying, he’s not going to have any problem with it. Every generation is supposed to come up and be like 'later for that we got something new.' This is one of the things that has made jazz historically great.

I think that people think I'm being disrespectful. The thing that they don’t know is that I’ve had conversations with these men where they've told me to do this. About three or four years ago I interviewed Wynton for Downbeat Magazine and he was like ‘Say what you gotta say. It’s your time now. I’m almost 50 years old, of course I’m going to keep pushing this rock but obviously it’s your time. Do what you got to do.’

The thing is those guys are smart enough to know that the younger musicians control their legacy. I’m not mad at them at all. I love them. I’ll be the first to tell you that you’re not going to find another human animal that can play the trumpet like that guy. That’s out of love and respect. I just don’t agree with everything conceptually.

5) Where did you get the idea to cover Thom Yorke's "The Eraser" for this album?
I just love the song. I'm constantly thinking about direction for the next generation of musicians. I can write any type of song in any type of style, that's not a problem for me because of my conditioning and my pedigree. I chose to do "The Eraser" because I really like the song and I thought if a kid hears this 20 years from now he can create a palate or a form or a type of music based on this type of movement. That's what I'm always thinking about. In 10 years, 40 years someone will say, 'Shit, he was giving us different palates.' I think that's important.

6) You've played "The Eraser" at a few gigs with Thom, how did that come about?
He just called my people and said 'I want Christian to play with us.' It was simple. I love Flea, he's killer. They're really cool cats. I was actually supposed to play at Coachella but it turned out to be a big production clusterfuck. So we didn't end up doing it because they didn't have a whole lot of turnaround time and I didn't want to be the reason that the sound sounded bad. Plus I had this nice hotel for me in Los Angeles and I could have a day off, my first day off in three months where I didn't have to do anything -- I'll take that.

7) What are your thoughts on Treme, the new show on HBO about your hometown?
I have a couple different feelings about that show because one of the characters is loosely based on me -- Delmond Lambreaux. He's played by Rob Brown, who's a very talented actor. He's incredibly observant. He's great. His character is based on me and my uncle. The character's father is a mixture of my uncle and my grandfather who was a big chief.

The first episode was a little creepy because when the character is introduced he's on the phone with his father and he says, tell Donald "One for Bird" which is a song that me and Donald always played together. He goes back into the club and he literally plays my solo from the record. I didn't know the shit was going to be this close. It's weird because he dressed the way I dressed in 2006 with the earring and the big watch.

But in the second episode they have him smoking a roach in the middle of the street and a police officer sees him, asks him to step back and he puts handcuffs on him.

So there are aspects of the show which are kind of cool to see, like damn he played my trumpet solo, but then there aspects of the show like the situation with the police that would never happen. It just makes the character not seem as intelligent as the guys from New Orleans really are. I had a few reservations about it. Of course, it's fiction but I find myself asking 'where's the positive character?'

I like that you get from the vibe of the show that these people are going through hard times but they're resilient and they're happy but I don't really want to see a New Orleans experience that is full of indigents and drug addicts. The standards and morality of the people of New Orleans is unlike anywhere else in the country. These people are regal. They're honorable people.

It's cool to have New Orleans on shine for a minute though, I'm not mad at that.