The Passing of Arizona's SB 1070 Leads to Protest Last Night in L.A.

There may soon prove to be widespread repercussions following yesterday's signing into law of what is being called "the toughest law against illegal immigration in the country," by Arizona Governor Jan Brewer, according to the LA Times. Last night in Los Angeles, Arizona's new law inspired a protest held by about 20 UCLA students and community members at the Federal Building.

SB 1070 allows any officer of the law at the state, county, or city level in Arizona to determine the legal status of anyone at anytime, among other provisions, including making it a crime to be in Arizona illegally.

President Obama believes the law is "misguided," and joins others who are afraid it will lead to rampant racial profiling. Other objections from those who oppose the bill in Arizona and elsewhere believe immigration is a national issue.

Brewer, however, believes the new law will help Arizona's safety, particularly in the face of what she calls "the murderous greed of drug cartels," and says the bill will protect the state from illegal immigration. 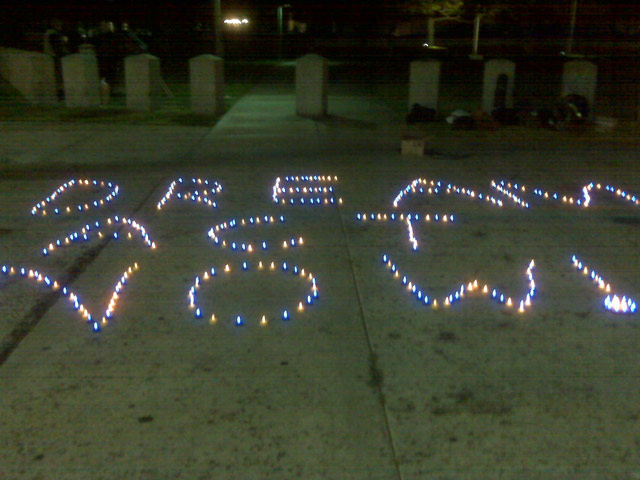 From the protest last night in Los Angeles (via email tip)

In addition to last night's modest protest in Los Angeles, it is expected that there will be other actions expressing opposition or objection coming from outside Arizona. The owner of a Los Angeles-based trucking company "said that about 70 drivers based in California and Arizona had agreed to stop moving loads into or out of Arizona in protest of the new law. He hopes to get 200 truckers on board for a five-day boycott that will start within 48 hours of the bill's signing," reports the Miami Herald.