Seven Questions: Jeffrey Ross, Comedian/Author of I Only Roast the Ones I Love 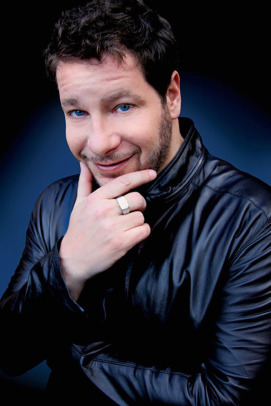 Photo by Kil Arens
LA has a diverse cast of characters. Whether it's the characters with stirring stories or interesting occupations or the people who are just simply characters, this town has them all. In an effort to get to know some of those characters a little better, we've created "Seven Questions with..." If you have a suggestion for a future Seven Questions subject send us an email.

Also known as "Roastmaster General," Ross has appeared on the big screen in Stuck on You, The Aristocrats and his documentary about his time entertaining U.S. troops in Iraq, Patriot Act: A Jeffrey Ross Home Movie. In 2009, the former "Dancing with the Stars" contestant, authored the book I Only Roast the Ones I Love which is available everywhere now.

Jeffrey Ross will be appearing this Saturday on the Los Angeles Times Stage at 2:30 PM at the 15th Annual Los Angeles Times Festival of Books in support of his book. Other authors appearing at this year's festival include: Wil Wheaton, Buzz Aldrin, Sarah Silverman, Amber Tamblyn, Dave Eggers and Carl Reiner.

LAist exchanged emails with the Roastmaster General covering his appearance at the Festival of Books, his black belt in karate, his take on MTV's "Jersey Shore" and much more.

1) You'll be appearing at the Festival of Books on Saturday at 2:30. What can fans expect to see from your appearance?
Adult language, adult content, partial nudity (and that’s just the Bea Arthur chapter).

2) What should fans do to avoid being an easy target for Roastmaster General on Saturday?
If you sit anywhere near the front, you’re definitely in the splash zone. But honestly, no one is safe from my insults. Warning: I will be on full blast at this event.

3) The book is titled I Only Roast the Ones I Love. Have you ever turned down the opportunity to roast someone you didn't exactly love?
I was asked about roasting boxing champ Mike Tyson once. He would have been a great subject. However I just couldn’t rap my mind around honoring a convicted rapist and part time cannibal.

4) How much does being a black belt in karate help you as a roastmaster?
It gives me the confidence to say the crazy things that I say right to people’s faces. Once time I thought Courtney Love might take a swing at me but I had the swagger of knowing I could take her down.

5) Is there anyone you'd be afraid to roast?
Hell no.

6) How much research goes into writing roast jokes?
I spend months preparing for the big roasts. It’s like a sporting event. It’s the world series of comedy.

7) As a New Jersey native, would look forward to the opportunity to roast members of the "Jersey Shore" cast?
Can’t do it. I only roast the one’s I love, and those people give Jersey an even worse name (which is very, very hard to do).

See Jeffrey Ross, comedian and author of I Only Roast the Ones I Love this Saturday at the 15th Annual Los Angeles Times Festival of Books. The festival is free to the public for general admission (which includes his stage and appearance). Tickets for a $1 service charge are needed for panel discussions and can be bought on Ticketmaster. More details can be found at www.latimesfestivalofbooks.com.