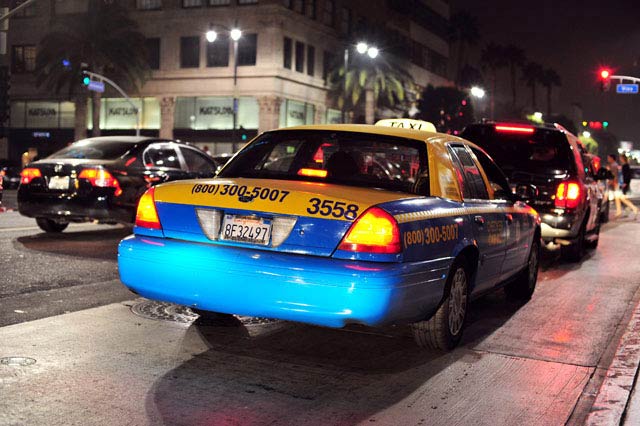 A Taxi on Hollywood Boulevard | Photo by Tom Andrews/LAist

Taxi cabs might not be the most talked-about mode of transportation in Los Angeles, but it's still an important part of local transit. Back in 2008, a Hail-a-Taxi pilot program began, allowing taxis to stop in red curb areas to pick up passengers in downtown and Hollywood. But the program "officially, and quietly, expired at the end of January," says blogdowntown's Eric Richardson, who notes that Councilmember Jan Perry has introduced a motion to extend the pilot program while taking steps to make it permanent.

Perry's reasoning is two-fold. One, there's been a "partial increase" in hail taxi operations in the two areas since the program began. "Drivers noticed that there is a relatively modest increase in customers flagging down taxis, which may indicate that the public is becoming more aware of the street hail transportation option," Perry wrote in her motion. The second is that there has been no "noticeable increase" traffic congestion, hazards or citations issued by the Department of Transportation.