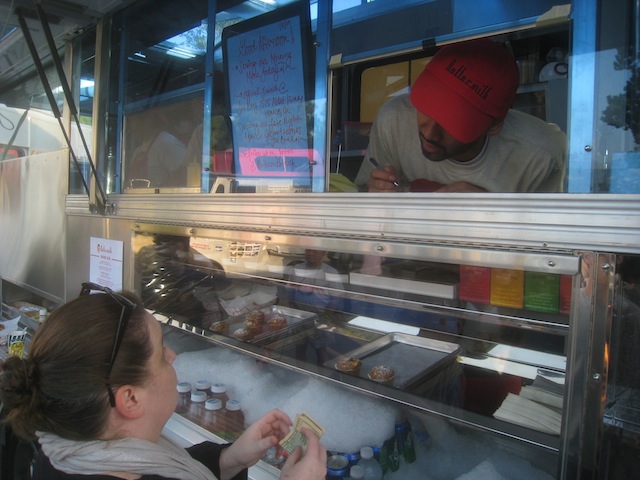 At the Buttermilk Truck | Photo by Zach Behrens/LAist

As Councilmember Paul Koretz describes it, he's been "bombarded" with e-mails from food truck supporters after a coalition rallied supporters to contact him over his stance on the mobile eateries. "I'm not necessarily a fan, but it's not my mission to stop it," he told LAist on Friday, admitting you'll occasionally find him eating at them, namely the Canters Truck and traditional taco trucks grabbing a burrito.

Koretz' office began receiving e-mails over the past week—around 60 total, a staffer said—after Southern California Mobile Food Vendors Association (SCMFVA) launched a campaign when they caught wind of a statement he said to the Park La Brea News/Beverly Press:

A lot of businesses in stationary, permitted locations feel it’s unfair competition, and I tend to agree with them. There have been problems with these trucks popping up in front of businesses and people’s homes. They’re less of a nuisance in one lot, but I’m not thrilled with that either. I think they work well at construction sites where it’s difficult for workers to have access to other food, but I think that should be their only place in the city.

Koretz said that in response to a planned food truck lot on 3rd Street at La Jolla Avenue, an idea that was later abandoned over rent issues. Still, for Matt Geller of SCMFVA, that quote didn't fly well with him. "It was a statement made in an irresponsible manner considering the people who run these trucks are working so hard," he said over the phone. In a blog post, Geller expanded, saying it makes him "nervous when City, State, or Federal officials take the side of one business, or industry over another."

But Koretz has felt the situation has gotten a little out of hand--even a fake Twitter account in his name has been launched--and wanted to clarify where he was coming from when he gave the Park La Brea News that quote.

"My concern is really responding to people who have complained in my district, and that's a pretty limited category," he said over the phone. "In a few areas, it's generally a nuisance, but it's got to be the overwhelmingly minority of these trucks."

The majority of complaints have surprisingly not come from businesses--an issue in the past seen on Wilshire Boulevard--but from an organized effort of the Holmby Hills Homeowners Association, which sent about 45 letters to the Councilmember regarding trucks parked on Beverly Glen. "I'm trying to be responsive, you can't ignore complaints like that... [The trucks] are not overly symphathetic to the concerns of the neighborhood," he said, citing the letters which described trash left behind and other issues.

"Whether we try to find a motion or a different regulartion or get some [council office field staff] out there a couple times... I think we have to get some relief" for the residents, he continued.

But in a humorous e-mail sent to Koretz, one food truck supporter disagreed with the notion of residential nuisances. "I cannot remember the last time I turned on the evening news without hearing yet another report of a household, under siege by Frytruck, or Coolhaus, or especially NomNom, forced to eat this inexpensive, gourmet, uniquely Angelino fare," wrote Peter Miller.

Despite the flurry of e-mails, Geller said he has received no response from Koretz, who admits he's been overwhelmed with the city's budget crisis. Nonetheless, Geller hopes the Councilman will visit the recently-opened food truck lot on Century Boulevard, which drew an estimated 1,100 customers last week, and see how positive the lots can be.

There are about 90 food trucks on the streets of Los Angeles. See a complete list here.