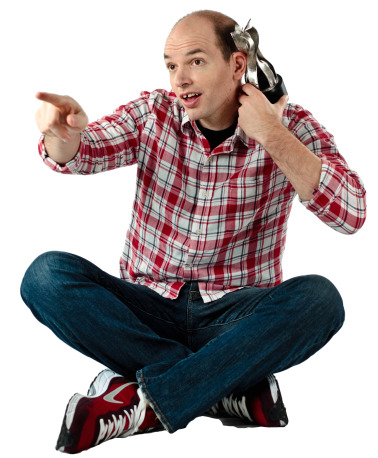 Prior to his days as one-third of MTV's "Human Giant" (LAist Interview), co-star of FX's "The League," panelist on VH-1's "Best Week Ever" or guest starring on "30 Rock," comedian/actor Paul Scheer was making audiences laugh online as one of the stars of "Shutterbugs," a Channel 101 classic featuring fellow "Human Giant" stars Rob Huebel and Aziz Ansari (Seven Questions, LAist Interview) as cutthroat agents to infant Hollywood stars. Paul, who recently hosted "A Night of 140 Tweets" — celebrity tweet-a-thon benefiting the people of Haiti, continues to make us all laugh online with his numerous Funny or Die.com videos and his must-follow Twitter updates.

Tonight, Paul will host the 2nd Annual Streamy Awards, which recognize achievement in web television and online entertainment. Nominees for this year's awards, which is being held at Downtown's Orpheum Theatre, include "Between Two Ferns with Zach Galifianakis," "Diggnation" and "Auto-tune the News." Live broadcast of the show kicks off at 5:30 pm on Streamys.org.

LAist caught up with Paul on the phone to talk about his preparation for the role of award show host, his "Los Angeles Years," his upcoming film and much more.

1) I've read that you called hosting The Streamys a childhood dream come true. How does it feel to have that dream come true?
When I was growing up there was no Streamys but I did have a time machine and I saw in the future there would one day be a Streamys Awards. I set my sights on that. Forget the Oscars or the Emmys, I want to do the Streamys.

2) Are there any other award shows hosts that you've studied in preparation for your hosting duties?
No. I have not been studying too many award show hosts. What I've been trying to do is just a lot of weight training so I'll be able to hold the trophies. That's what I've been focusing on. I've been doing a lot of cardio, lots of reps because those Streamy Awards, people don't realize it, but they weigh 97 pounds. They're weighty awards. From what I understand, there the heaviest award given out for any award show. This is a big deal. It's all about doing the body work, that's what I'm about.

3) Do you have any predictions for the night?
I don't know because there are so many good categories and so many good people in those categories. Sometimes when you watch the Academy Awards or the Emmys or the Golden Globes you see something nominated and you're like, 'That movie was kind of crappy,' and 'That show was pretty shitty,' but I feel like right now, since The Streamys are in their infancy everything is pretty good.

You have Zach Galifianakis going up against David Wain. And you have Felicia Day, Zoe Bell, Robert Englund and Tatyana Ali -- all of these awesomely funny, good people doing great work. So, yeah, it's going to be a tough race.

4) Is there anyone you're looking forward to meeting for the first time on Sunday night?
I'm curious to meet Felicia Day. I feel like everyone talks about Felicia Day. I've spoken to her over email but never met her in person, so that will be interesting. And then of course, Freddy Krueger, Robert Englund. How could you not be excited to meet that guy? And I can't give a spoiler out but there's one celebrity guest that they got that they told me about last night that me say, 'WHAT? How did you get that person?' So that's another person that I'm very excited to meet. But that will be a surprise for the show.

5) You've got a new movie called Piranha 3-D coming out. What can you tell us about that?
Piranha 3-D is coming out in August. It's like what the title sounds like. It's a very dramatic film about the dangers of swimming during spring break after an earthquake while piranhas attack.Hopefully it will be an educational film, pretty eye-opening. It's the Super Size Me or Inconvenient Truth of piranha attack movies.

6) You have a very thorough and detailed Wikipedia page. According to that Wikipedia page, we're currently in your Los Angeles years. How are your Los Angeles years treating you?
You know I was excited by that at one point, but now I'm thinking 'Man, there's too much information about me. Who really wants to know all of this information about me?'

Yes, my New York years are very different from LA years. I'm constantly at the UCB Theater. I'm gearing up for the second season of "The League," which will be on the air at the end of August. We're doing 13 episodes this year, which will be fun. Also, I'm going to be on an upcoming episode of "Party Down."

7) And lastly, speaking of UCB, are you surprised how popular your "Facebook Show" has become?
It's kind of funny because the group I do that show with is the same group I performed with during my 'New York years' and we used to do a show every Saturday night at 10 and it was always sold out week after week. When we came out to LA to work at UCB LA, we thought we'd be excited if we could get the place like 75 percent full. Then we starting getting a full house. Now, I think that comedy has kind of exploded a little bit out here since UCB came out here. There's always been standup in LA, but now there's a lot more outlets. I'm really excited about it.

Rob Huebel and I do a show called "Crash Test" every other Monday and the same thing happened there. It's kind of a cool thing. I feel like LA is a very loyal crowd. They hear about it, they tell their friends about it and they come back a lot. Because the "Facebook Show" and "Crash Test" are different every single week, you'll get a different show every week.It's not like going to see a standup, where you'll see maybe 75 percent of the same material week after week. You're getting a brand new show from top to bottom.