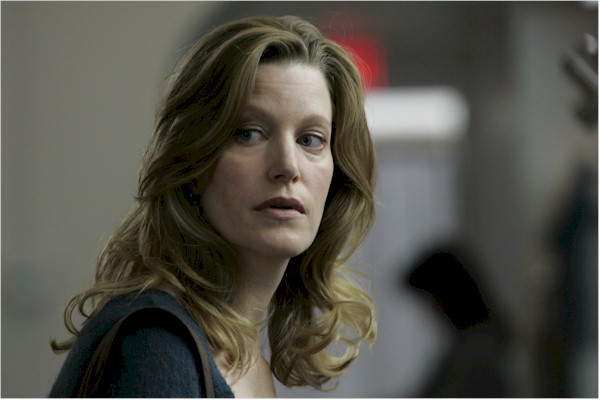 Anna Gunn currently stars as Skyler White on AMC's Emmy and Peabody award-winning series "Breaking Bad" (Sundays at 10pm) but it was her portrayal of Martha Bullock on HBO's "Deadwood" a few years ago that cemented her as a leading lady in cutting edge television. We had the chance to speak with Anna Gunn over the phone as she was in New York City to film a guest spot on "Law & Order". We were so pleased to get the following tremendous insights into her character and the show:

LAist: We've been a big fan of yours since we got to see so much of you in "Deadwood" and we're hoping that some weirdness can happen and that you could get a cameo on FX's "Justified" to bring it all back together with Timothy Olyphant.

Anna Gunn: [Laughs] I know, wouldn't that be good?! He's a terrific guy. I feel that I've been so lucky with my leading men between Tim and Bryan [Cranston], they're both incredibly wonderful people as well as being terrific actors.

LAist: We're finding that in our writings about "Breaking Bad" that your character, Skyler White, generates some of the same kind of feedback from our readers as Julie Benz's character, Rita Bennett, did on "Dexter" - that she's a downer, and that she's cramping Walter's efforts, etc. But we feel that without Skyler there would be no "Breaking Bad", there would have been no reason for the Walter White character to try to fight his disease and go down the road he's chosen.

Anna Gunn: It's interesting because the writers, Vince [Gilligan, series creator], Bryan, and I have discussed that we've seen that it seems to sometimes break along gender lines that we see women really rooting for Skyler and that it's understandable why she's suspicious and upset and everything she's going through. And then I've heard people sometimes say "well, she's such a bitch!" When I heard that the first time I was really hurt because I feel that I'm an advocate for my character, it's my job to inhabit them and fight their fight.

To me, Skyler's fight makes sense, she's all about fighting for her family, she's all about her kids, and she's all about keeping the whole thing together. She's not a wimpy, pushover person - she's a strong and challenging person. We've tried to walk a fine line with her, we didn't want her to be a put-upon victim-y wife, everybody wanted her to have a very strong backbone. For me, I have two kids so I can draw upon my experiences as a mother, and I understand that fierce protectiveness of being a mom. I think that's where Skyler lives, I think that her every thought originates with that.

I think that for Walt, this is necessary as part of the show. He's created as the ultimate anti-hero, the audience understands why he's doing what he's doing because they really get to see his inner workings and psyche. For Skyler, quite honestly, there is less time spent on what might be going on with her. I have my work cut out for me in terms of really knowing specifically where she's coming from, minute by minute. It's been important to me to never play her as a victim but to play her as somebody who is a fighter.

I did get past the point of feeling badly that some people felt that Skyler should "just stop bitching at Walt" because this is part of the fabric of the show. She's the one person who really is standing in Walt's way and presents the most challenge to him. Without this, what would the struggle be? What would the dangers be? Without her, the fine line he is walking would be less electric. Because of her strength it makes what he is doing even more dangerous.

That's why when the writers chose to turn the whole thing on its head at the beginning of this season with Skyler finding out what Walt was doing which I thought it was such a brave and bold and terrific move. They knew from the beginning of the series that she was going to find out at some point but there was a big struggle about how long to keep it going on because Skyler was painted as a smart person from the beginning, you couldn't keep her in the dark for too long - but if she's not in the dark, what happens? So I really applauded the fact that they took a big swing at it. When she walks in on that first episode and says to Walt, "You're a drug dealer", I really don't think the audience was expecting that.

LAist: An ongoing theme of the show is that we're watching the unravelling of Walter White but with the family strife that is now going on, we're watching other characters and their relationships disintegrate as well. For example, the situation between Skyler and Walt Jr., who has been acting as an enabler for Walter to get back into the house and their lives.

Anna Gunn: These episodes are painful to play because the fabric of the family is being ripped apart. Walt has been doing this whole thing for his family but what he's discovered in himself goes way beyond that, the Heisenberg personality, and the Pandora's box that he's opened - these decisions are closing in on him. Skyler, on the other end of it, everybody thinks she's this heartless person who has kicked out this guy with terminal lung cancer, and she's placed in this impossible position of playing the bad guy because she can't share why she's doing this with anybody.

That's what's I've found so fascinating with her because: Why doesn't she say what's going on? But she can't and that's speaks volumes about her as a character and as a person. She will do anything in the world to protect her son from pain or from something harmful - she knows how much he loves and idolizes his dad and for all she knows, Walt doesn't have long to live.

We've been told that everyone in the show, will "break bad" in their own way. It started out in season one with Skyler's sister revealed to be a kleptomaniac. The sort of fissures and cracks, the shadow parts of everybody's personalities is what the show really explores. There's one part of our personalities that is presented to the world and then there are these other things going on inside of all these people.

In this season we really see Skyler start acting out and breaking bad in her own way. You can even see it in the decisions we made about how she looks: what she's wearing, how she does her hair, and those kinds of things. She starts to form her own identity because, to me, Skyler had felt like kind of an invisible person, the stay-at-home mom who takes care of all the details and hard work that no one ever recognizes or acknowledges. In episode one of season two she exploded at her brother in law Hank with "what about me? What about me? Everyone is expecting me to shoulder all of this? Doesn't anybody know what I'm going through?" That really summarizes so much of what Skyler has been dealing with. This season you really get to see her implode and then explode.

LAist: I saw that you had a history of living in the Southwest. Were you the first one in the production team to acclimate to the environment when you went to shoot there?

Anna Gunn: Oh yes, I think so. Even though I've lived in LA for a long time, I still feel that New Mexico is my home, that's where my heart really is. I was the first to introduce everyone to green chili and all the local foods and specialties. Because my kids go to school in LA, I'm often on a plane traveling back and forth but I feel lucky because they get to come out with me during summertime and breaks and I get to share with them all the stuff that I loved about growing up out there. It's amazing that it worked out that way, I still am shaking my head at the coincidence and irony of it.