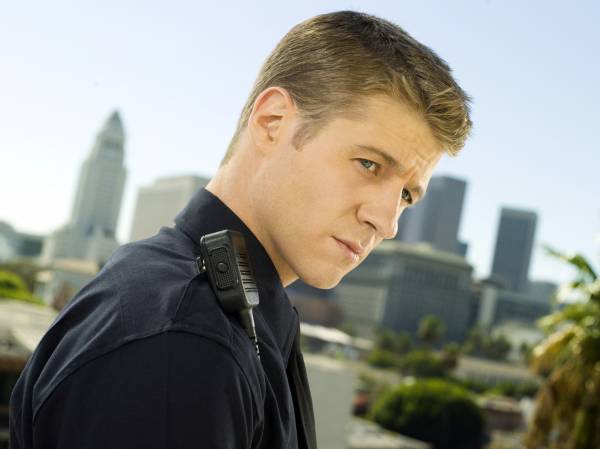 Before Ben McKenzie took the role of rookie Patrol Officer Ben Sherman on formerly NBC's and now TNT's "Southland", we all became familiar with him for his portrayal of the conflicted Ryan Atwood in Foxs "The O.C." Tonight the season finale of "Southland" airs at 10pm on TNT - we hope that this series, one of the best that premiered in 2009, makes it back for many more seasons. There is nothing formulaic about this contemporary portrayal of what patrol officers in Los Angeles do every day - the writing is superb and every episode brings a multitude of real LA locations to the screen with an incredible cast that makes every episode that much more real and gripping.

We spoke with Ben via phone last week. [Today @TNTWeKnowDrama will be holding a live twitterview with Ben and co-star Michael Cudlitz from 2-3pm Pacific-

LAist: So [tonight] is the season finale, is it also the series finale?

Ben McKenzie: We don't know whether we will be renewed or not. TNT has been fantastic and have put a lot of muscle behind the show - the ratings have been solid, not spectacular, but a lot of people have been DVRing the show and watching it that way, so I truly don't know if we are coming back yet. I'd certainly happily share the information if I had it but I think TNT is going to take its time to see how we do and how they want to go forward.

LAist: The LA setting of "Southland" reminds me a bit of "The Shield" but that show was more of a fantasy.

Ben McKenzie: That show did have a dramatic focus on corruption and power plays among certain members of the LAPD. Our show is more of a slice of life of the LAPD, from patrol cops to detectives. If we get to go again, we may have an episode or two that focused on corruption, but that's not really the angle that we're pursuing. "The Shield" was a terrific show and I'm flattered at the comparison.

LAist: You've been involved in the series for a year and a half but have only shot 13 episodes, when you talk about the series now, does it feel a bit like a movie that you did way back when?

Ben McKenzie: We shot the last episode last October so it has been six months of waiting to see these episodes come on, so it is kind of like a movie that we did a long time ago.

LAist: What kind of preparation did you do for the part of Officer Ben Sherman?

Ben McKenzie: There was a lot of training for the entire cast in terms of acclimating us to the world of the LAPD. We went through a week-long bootcamp before we shot the pilot and then another week-long bootcamp before we shot the series. We worked with our technical advisors who were both ex-LAPD. We did ride-alongs with cops, we went to the firing range to fire weapons appropriate to our characters, we worked on handcuffing procedures, we worked on tactical stuff like how to search a room and how to maintain appropriate spacing between partners so that they aren't in each others line of fire. A lot of that kind of stuff, so that we could feel capable of semi-realistically portraying these scenarios.

Since our technical advisors were on set we could go to them right there with any questions we would have about a particular scene. I think that was crucially important to creating the show. Our technical advisors were involved in every aspect of the creation of the show, from the stories that we tell, many of which were taken from real cops, who were interviewed for the show. Every cop has at least one or two incredible stories that are so crazy that you wouldn't have believed them if they weren't true.

These stories were turned into scripts but when you are on location the stories had to be adapted because of the geography of where people are located at a scene. The actors are, I think in a really wonderful way, treated as fellow collaborators on the show. We were allowed and encouraged to change around things, nothing drastic, perhaps adjusting some improvised lines of dialogue and how we would move in a scene.

Particularly for patrol cops, whenever they are coming up on a call, they have no idea about what they are getting into. There are a lot of shows about detectives solving crimes, the "Law & Order"s and "CSI"s are well oiled machines, there's a crime at the beginning of the episode and you spend the rest of the episode trying to solve it.

"Southland"'s focus on patrol cops, where hopefully you feel like you are riding along in a car with a pair of patrol cops as they get calls on the radio to go off to wherever they are going off to - very often they don't know what they are getting into. In the pilot, which was titled "Unknown Trouble", is the perfect name for what they are going through. That lack of knowledge on the cops' part is something we hope the audience can buy into. That world of uncertainty is what the cops live in. Any situation can go sideways and they can find themselves in a treacherous situation.

LAist: You mentioned the training you received and these procedures do become a part of the plot. In "Unknown Trouble" your character was told to just move a suspect along without completing the pat-down and the gangbanger had a backup gun that he used to shoot a cop with.

LAist: How has it been working withMichael Cudlitz, who plays your partner Officer John Cooper?

Ben McKenzie: It's been great, he's very easy to get along with and a total pro. You've probably seen him on "Band of Brothers" and many episodes of other shows. He's terrific actor and very giving, and kind of blue-collar about his attitude when approaching the show which is an attitude I try to have. We're members of a team that are trying to do 4 or 5 locations in a day, we're moving very fast, you need to be on your toes as an actor and nimble, able to adjust on the fly to what's happening. If you are overly precious you will find yourself overwhelmed by what's happening.

We have a great Director of Photography, Jimmy Muro, who is shooting the show in a really cool way, using almost all handheld Red cameras, naturalistic, very fluid and movement oriented. As an actor you need to come in knowing your lines and ready to go - Michael's great at that and I think we have a good partnership.

LAist: We hope to see that partnership again in another season of this great show.

Ben McKenzie: Thank you, right now I'm just waiting on the future of "Southland" as this process hopefully culminates in another season, I hope to speak with you in the future about seasons 3, 4 and beyond.

-----
The "Southland" season finale airs tonight at 10pm on TNT. TNT will be hosting a twitterview with Ben McKenzie and Michael Cudlitz from 2-3pm at @TNTWeKnowDrama