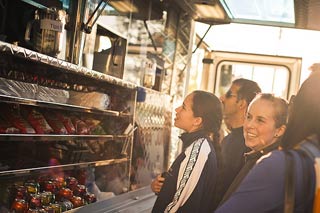 Photo by strph via the LAist Featured Photos pool on Flickr
Forget power lunching. Where it's at when it comes to what you can eat at lunchtime, the business to be in from now on in Los Angeles is construction. Because according to one official, that's the only group of people who should be able to buy their lunch from a truck.

The dark side to the food truck craze isn't the fact that patrons have to stand in long lines, it's the opposition they collectively face from business owners and elected officials who believe they are eating up profits and over-asserting their place in the city's workings.

Here's what he said:

A lot of businesses in stationary, permitted locations feel it’s unfair competition, and I tend to agree with them. There have been problems with these trucks popping up in front of businesses and people’s homes. They’re less of a nuisance in one lot, but I’m not thrilled with that either. I think they work well at construction sites where it’s difficult for workers to have access to other food, but I think that should be their only place in the city.


That's right. Only construction workers should be able to purchase their midday meal from Kogi, The Nom Nom Truck, or Coolhaus.

Much like when businesses along Wilshire expressed their dismay at the trucks lining the city street at lunchtime, the issue of competition arises: Is it good or bad? Are food trucks really competing with brick-and-mortars?

On Friday afternoon, and employee of a shop (one that does not sell food of any kind) along Abbot Kinney in Venice ran outside and began to holler at the driver of one of the city's popular food trucks. The truck operator asserted his right to park there for three hours, and the store employee departed in a rage, yelling that it had better be just three hours.

Witnessing this scene, on a street that is constantly bustling with foot traffic (usually well-heeled locals with money to spend) and that often welcomes crowds in droves to community events--including First Fridays that very same night--brought to light the kind of conflict a brick-and-mortar restaurant owner would likely never encounter. Would the same store employee barge into the new eatery next door and shout about their right to operate?

The food trucks have a coalition of sorts, the Southern California Mobile Food Vendors Association (SoCalMFVA) that formed as a reaction to this kind of community tension. Aware of public declarations against their industry like that of Councilman Koretz, they are asking their supporters to mobilize as well.

In the case of Koretz, they are encouraging people to send him a letter or e-mail, or call his office. They have been publishing selected e-mails on their blog, too. "Competition is a healthy part of the marketplace and the real beneficiaries of competition are the consumer," they add.

As of our last count, there are 90 food trucks or mobile food vendors who are considered part of this new trend. That's not counting the hundreds of lower-profile, more traditional mobile kitchens that do stop at construction sites and in neighborhoods all over Los Angeles (aka "roach coaches") that have not been the subject of opposition from businesses and elected officials. Are these catering trucks relative nuisances to homes and businesses, too?