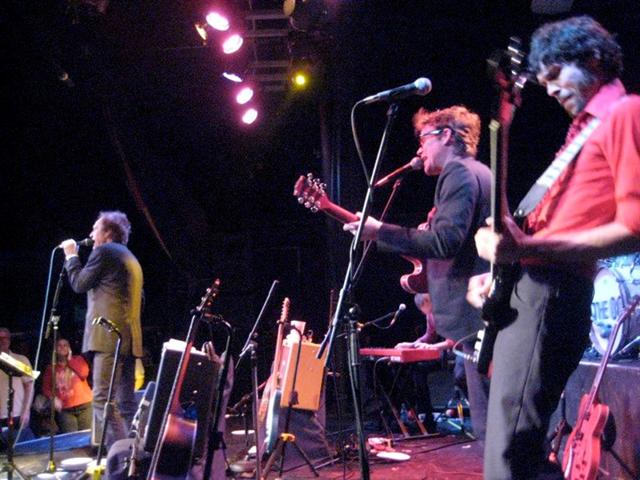 Even though Kinks headmaster Ray Davies had traded a loud electric band for an intimate, acoustic duo format, and found himself in this moment performing for a crowd of dinner patrons still finishing their chicken pot pies, the singer made it clear that this night was not going to be a classical recital demanding their silent attention, but rather a singalong ‘round the bar. “If you know the words to any of these, please join in!,”, Davies invited, as if any encouragement was needed. Moments later, he and partner Bill Shanley were stomping through “Victoria”, and Davies got what he asked for as the room roared back one of rock’s greatest one-word choruses. Acoustic or not, an evening of Kinks songs was always bound to be more rousing than your average dinner theater.

Davies seemed in a jolly mood as his US tour with local lads The 88 came to a close, at this funky little spot miles west of the San Fernando Valley. Seeing the Kinks in their arena days was like seeing the Replacements in their club days, always something of a gamble. The band would veer from tepid and professional, to wildly inspired, to a drunken shambles, then back to brilliant, often in the course of the same show. The center of the tornado was always Ray himself, and the mood of the shows tended to reflect what stage of drunk he was in at the moment - fun and boisterous, tired and grumpy or spoiling for a fight. The best time I ever saw them, they were consistently great for a little over an hour, then collapsed completely and sent us home with no encore.

Twenty-five years later, he’s much steadier, but still has that wicked gleam in the eyes that suggests a punch-up might be right around the corner. Most gratefully, he’s still singing very well, and on this trip, has pulled out a lot of songs that haven’t been performed in years. “I Need You”, the lesser-known companion to “You Really Got Me” and “All Day And All Of The Night”, was brought out early and set the tone for the night. Shanley’s second guitar served as combination rhythm section and soloist, pushing the beat forward and filling the harmonic spaces under Davies’ melodies. Even without a bassist and drummer, the pair were able to simulate the push-pull dynamics of those early songs, sometimes to better effect than the Kinks themselves did at those heavy metal-flavored arena shows of the eighties.

The Canyon’s small room took on the feel of a house party as more and more familiar choruses came around. Much of the set list came from the Kinks’ mid-to-late-sixties golden period, including rare gems like "Two Sisters" and "This Is Where I Belong" along side the enduring hits "Tired Of Waiting For You", "Well Respected Man" and "Dedicated Follower Of Fashion." Just a few songs from the seventies were played and surprisingly, none at all from the eighties albums that produced some of their biggest American radio hits. The back-to-the-roots manifesto “Apeman” was a particular joy, receiving some of the most enthusiastic audience participation of the night, while the garage classic “I’m Not Like Everybody Else” was all the more menacing for its reduced volume. A sprinkling of more recent solo material gave some glimmers of hope that good work is still to come.

For the encore, Davies and Shanley were joined by tour openers The 88 for an ecstatic, electric blast through “You Really Got Me”, “David Watts”, “Low Budget”, “Celluloid Heroes” and “Lola.” The combination was thrilling; much like the Wondermints playing behind Brian Wilson, The 88, who'd earlier delivered a memorable power-pop set of their own to start the show, seem to have been born playing this music. It was a loud and fitting close to the evening with of course the heartiest call and response singing of the night for the tranny-anthem “Lola”. But it was “Celluloid Heroes” that resonated most forcefully. This was the first time I’ve ever seen Ray in - or anyway, near - Los Angeles, and the song takes on extra meaning after living in close proximity to Hollywood for twenty years. It’s not just about the people who got their names engraved into the street, it’s about those who “suffered in vain,” and who that lives in LA doesn’t know some of those?