How To Build A Materialistic Teen 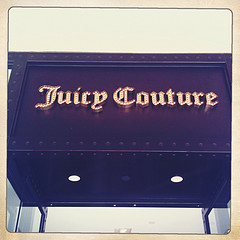 Photo by honeybeejen via LAist Featured Photos on Flickr
"When you grow up, the more money you have, the happier you are."

"The only kind of job I want when I grow up is one that gets me a lot of money."

These are statements that the majority of 9-14-year-olds agree with, and its got parents and teachers concerned. Many social scientists have concluded that today's teens are "...the most brand-oriented, consumer-involved, and materialistic generation in history."

What causes teens to crave the latest from Gucci or Marc Jacobs? Previous research has suggested that teens learn these preferences from their parents and their peers. But in research forthcoming in the Journal of Consumer Psychology, Lan Nguyen Chaplin and Deborah Roedder John wondered if there was more to the obsession with designer labels than previously thought.

They said that instead of viewing parents and peers as models for materialistic attitudes and behaviors, "we consider [them] as important sources of emotional support and psychological well-being, which lay the foundation for self-esteem in adolescents." Parents and peers weren't seen as promoting materialistic habits; instead, they were seen as providers of support and stability. "We find that supportive parents and peers boost adolescents' self-esteem, which decreases their need to embrace material goods as a way to develop positive self-perceptions."

A teen's parents and friends can provide the acceptance and support that most teens desire. If they have that support, according to this research on teens 12-18 years old, their need for the latest expensive purse or jacket is greatly reduced. Expensive clothes would not need to be used as a substitute for self-worth. Chaplin told ScienceDaily: "When teens feel better about themselves, they are less likely to feel the need to use material possessions to boost their self-esteem and achieve happiness."