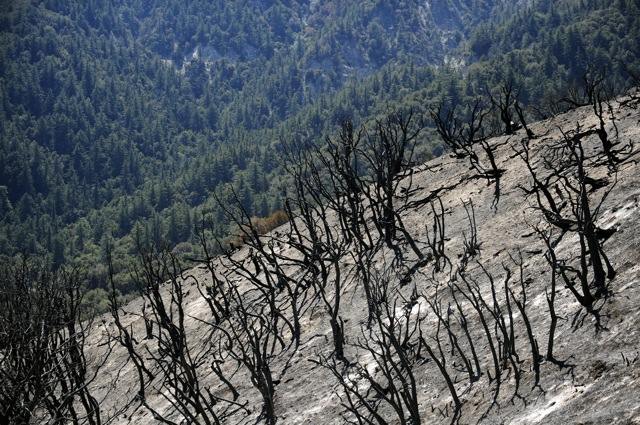 $1.5 million will go towards planting over a half million trees in an area of the Angeles National Forest that scarred by the Station Fire last year. The Board of the Air Quality Management District today approved the action, which uses money from a Chevron mitigation to offset carbon dioxide emissions resulting from the expansion of its refinery in El Segundo. "Chevron’s project is the first in the region where greenhouse gas emission reductions were required as part of an environmental analysis," noted a news release.

The Station Fire ripped through 162,000 acres—that's about 253 square miles—of the Angeles National Forest last August and September. Of the large burn scar, 11,000 of the 32,000 scorched forested acres were so badly burned that seeds were destroyed, hindering any natural regrowth.

“Due to the devastation of the recent fires, human intervention is needed to rehabilitate our local forest,” said William Burke, chairman of AQMD’s Governing Board. “This project will help speed forest recovery and provide meaningful greenhouse gas and air quality benefits.”

Today's funding approval will go towards 580,000 trees within 1,800 acres. The project will begin with seed collection this Spring, followed by 12-months of growth in a nursery and re-platning in the Spring of 2011.