Seven Questions: William Faith of 'Faith and the Muse' 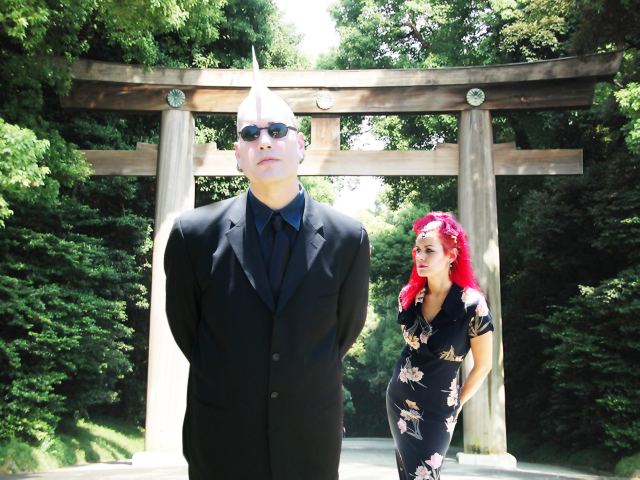 William Faith and Monica Richards, collectively known as Faith and the Muse kick of a 40 city and 40 night tour in Los Angeles

Faith alongside Monica Richards are Faith and the Muse, an innovative highly regarded and well-respected band in the Underground community. Since the duo formed in 1993, they have released six albums, including their most recent, ankoku butoh, which was released in October 2009 and have been touring all over the globe winning over fans with their incredible stage presence and theatrical performances. On Saturday, the icons of the Underground kick off their 40 cities in 40 nights tour in Los Angeles at Bar Sinister.

LAist had the chance to chat with William, a native of Los Angeles, about their upcoming tour, musical influences, interest in permaculture and much more.

1) Faith and the Muse is known for mixing it up from tour to tour. What can fans expect on this tour, which kicks off here in LA?
This tour is particularly important for us because it's the very first time that we've actually been able to do our full theatrical presentation the way we wanted to do it. On prior tours, we've always had some sort of drawback or difficulty or the purse strings were too short or something somehow would hamstring the end result. We've never been able to do the full show that we had in mind. So this is the first time, as we've been away for so long, we've finally decided this is it.

This time we're going to dig in our heels. We're not going to compromise. We're going to do the show the way we thought about it. We designed this concept and we said we're going to see this all the way through. So far we've been doing it and I have to say that the European run was just a real delight. All of the fans over there really responded to it. For the very first time we came off stage every night feeling like we actually lived up to our potential in our minds.

2) How important has touring been to the success of this band?
In our case I'd say it's got to be about 80 percent. To some extent it's almost impossible to tell because we've built everything we've done as a touring band. When Elyria (the band's first album) came out in 1994, that came out less than two weeks prior to us going out on the road for the first tour. It was already built in to who we were from word go. Our entire reputation is built on our experience as a touring band.

3) Your latest album, ankoku butoh, is Asian influenced. What inspired you to go that direction musically?
For us like most things, it was an organic evolution over a period of time. When we started out, we got pegged as Celtic band by people who had just listened to the first two records. There was a lot of Celtic music on there so I think people were quick to say 'Oh, that's who they are.' And then when we did Evidence of Heaven in 1999, we didn't stray too far from that because we went over into Victorian and Elizabethan melodies and instrumentation. Then when we really post-modern with the Burning Season in 2003, I think that really threw everyone off. To some extent, it was designed to do so. It gave us kind of clean slate, a free open situation and open field to play in.

After the Burning Season we didn't do anything for almost six years. There was a lot of quiet time. We just used that time to develop what we wanted to do next. In those years, we kind of developed a love for Japanese horror or J-horror in terms of movies. Monica was also the one who discovered Butoh and passed it over to me and I fell in love with the dance form straight away. I became quasi-obsessed with it over a period of time. Taiko was something we've always had an interest in because both of us were fans of Kodo some years back and had always thought that one day we could make it work.

Ultimately, if I have to hinge it on one thing I would say it's the political and ecological environment that we currently find ourselves in. The anger coming off of that with the interest in J-horror and then from the ecological point of view, Monica started delving into the Japanese Shinto religion and their belief system and how it's tied to nature. With the political climate that we're in, with all of this tension that's all around us in the last year there was this martial war-like feel that I was centered on and the Taiko drums illustrate that really well. All of these things kind of slowly came together and we distilled it down into this expression.

4) For someone who is unfamiliar with your music, what do you think will surprise them the most the first time seeing you perform live?
Despite the fact that we have a rather extreme look and this intense stage presentation, that musically we are all over the map. We do have darker, harder rock stuff but it also drops down at various different points to ambient, neo-classical types of works to more folk-based music. The fact that we go so far afield all in one show, I think would surprise people the most.

5) You are originally from LA, and Monica moved here from Washington D.C. in 1993. How much has living in LA been in influence on your music?
We're LA to the bone. I grew up here. I went to my first concerts here. I found punk rock here. I came up through the scene. All of my associations, most of the stuff that I'll touch on musically in some respect has some sort of analog to Los Angeles. Unlike a lot of people who like to tear down the city, I love this place. I grew up here and all my influences are ultimately based here. It makes perfect sense and it comes through in the work.

6) Your Wikipedia page says that you guys are "actively working to retrofit your home into a practical example of a sustainable suburban homestead." Is that accurate, and if so, could you tell me a little bit more about that?
Oh, I didn't even know we had a Wikipedia page (laughs). What I think that's pointing to is a project we have called Ars Terra. Basically it's something that's become tied into the work, somewhat inadvertently. As I mentioned there are ecological themes in the work and what that stems from is our discovery of something called permaculture, which is a system of designing sustainable human habitats and basically how we interface with the natural environment.

We began to take an interest in this after we were starting to see the way that various different areas of land are becoming really degraded and screwed up because of human involvement and industry. So we started thinking of our place in the grand scheme of things and how we do things and that became another point of interest and what can we do here to change the game and the way the game is played really. We have a lot of friends who are artists, and friends and fans who are interested in what we do so we thought this was a great opportunity for us to not only learn, ourselves, but also educate through our learning process.

We've changed a lot of our house over. We have a Greywater system. We have a composting toilet. We grow a lot of food here. We also practice a lot of bioremediation, which is planting specific plants that have a relationship to the landscape that can help to reclaim disturbed land and make it fertile again. So there's a lot of different things that we do here that basically point towards the goal of sustainability in the long term.

There are people who think we've lost it and became crazy old people, but I think the new album is punk rock enough to off set that somewhat.

7) Lastly, as you set off on this 40 cities and 40 days tour, what do you think you're going to miss most about being home in LA?
I'll say the plethora of vegan restaurants. Those get really slim when you make it to the south, I'll tell you.

Faith and the Muse kick off their 40 cities and 40 days tour on Saturday April 3rd at Bar Sinister.