Light Rail or a Streetcar for Warner Center? L.A. to Apply for Transit Grant 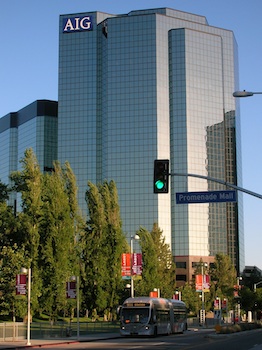 Photo by fredcamino via Flickr
It's been a topic for some time now. The Warner Center in the West Valley is one place that could use a local circulator, perhaps a "people mover," some believe. Three years ago, 300 residents came out to work towards an integrated transportation network for the Woodland Hills neighborhood and now, with state money available via grants, Los Angeles wants in.

Today, the L.A. City Council approved a grant application for $180,000 to "study the feasibility of an internal transit circulator, including the potential for light rail in the Warner Center" (we'd wager that a street car might be a better fit). Caltrans has a total of $3 million available to local entities for community based transportation.

The center is one of the few accomplishments of L.A.'s "Centers Concept," which was a 1974-adopted plan to build dense areas around city connected by transit. It never fully came to fruition, but the Warner Center today is home to a handful of skyscrapers, malls and the Orange Line and 750 Metro Rapid bus route.

In downtown Los Angeles, a streetcar is planned for 2014.

Valley Related: A Busway for Van Nuys Blvd. and More Rail Service in the Valley?