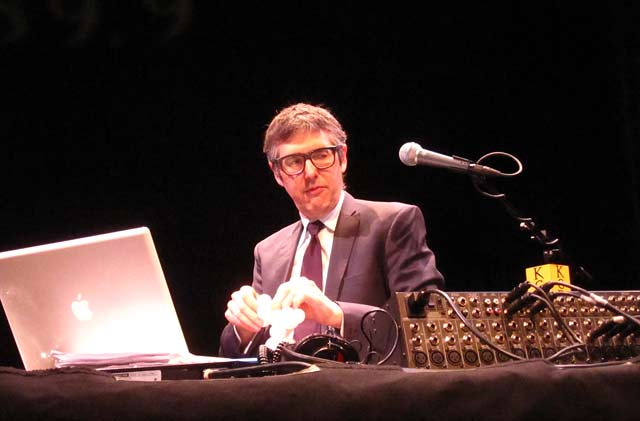 There's that magical moment when you're hearing a story being told when you're hooked. You might not say it aloud, but there's that pressing sense of wonder: "And then what happened?" The action unfolds, and then there's that pause. The "ahhhh" moment. You're digesting the lesson, the connection, the revelation. You're satisfied. Exhale.

This is the stuff of Chicago Public Radio's "This American Life," which has been reeling us in and holding us captive for 15 years. But how does this magic happen? The art and craft and imprecise science of storytelling for radio—not, as some pundits might deem a dying medium—was the heart of an evening of live storytelling by TAL's creator and host Ira Glass, who did a set of two shows last night at Royce Hall to benefit KCRW.

Described before the show by a reporter as "the alpha male of the beta males," Glass commanded the stage with the same wit and grace you hear on the airwaves weekly, with the added bonus of being able to see his impish smirk, or the flourish of his arm as he instigated a music queue or narrative clip reminiscent of a DJ working the turntable at the apex moment of a stirring groove.

Glass framed the show around the context of creating stories, and so the audience was treated to not only moments of great storytelling from the show itself, but the discarded bits, the dead-end bits, the from-the-vaults bits, and emblematic bits, all in service of a sort of behind-the-scenes glimpse inside the making of radio stories.

Where do the stories come from? Some begin with a listener email, some are the fruit of many an internet search, some are just the re-telling of a tale told by a friend over some drinks. But their shape--that uncanny way they sometimes draw us in and make us sit in our cars in the driveway just so we don't miss the ending--is essential. Glass, with a more impressive mastery of comic timing than most working stand-up comedians, admits that at a certain point in his radio career he realized he hadn't actually invented the form, nor was it created by a beloved rabbi from his childhood in Baltimore, but rather this action-action-action-reflection formula was, well, The Bible.

The entire evening was not Biblical, in content or scope, but surprisingly intimate, despite the incongruity of hearing Glass not alone and from a speaker or pair of earphones, but from within a microphone set up in a large auditorium. Balancing the power of stories told about Hurricane Katrina, 9/11, and the election of Barack Obama were moment of pure humanity, like the office worker who mistook a small-statured intern for the child of a co-worker to the man who insisted he unceremoniously dumped his late wife's ashes in a parking lot after a dispute with the cemetery about their billing practice. Glass even paused to make someone a balloon animal, joking about his younger years working in something even geekier than public radio--as a party clown and magician.

Before a brief Q&A with the audience, Glass' "Radio Stories" ended with a brief re-telling and homage to the ultimate in storytelling, the Arabian Nights. Though Glass has just over 400 "This American Life" episodes to his credit--not quite the 1,001 nights of life-saving storytelling of Scheherazade--the parallel is resonant. Though he teased us that we could someday need the skill of oral storytelling in order to save our lives, the fact remains that our lives are our stories, and, if we are willing to take a moment to listen, we can understand each other, and our selves.