LAPD: Crashes are Down at Red Light Camera Intersections, KCBS was Wrong 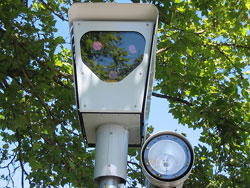 Remember when CBS2 investigated crashes at intersections where red light cameras were installed? Their report concluded that incidents were up, citing the number of rear-end crashes when drivers stopped earlier than expected at yellow lights. But that report was faulty, in our opinion, ignoring the fact that red light cameras are not to blame, but people who tailgating are.

It also said the lights were cash cows, which may have been true then, but now they lose $100,000 a month and are under consideration to be cut to save money. Governor Schwarzenegger wants to help balance the state's budget with more red light photo intersections and some with in Los Angeles want the number of camera-intersections doubled.

In response to the report, the LAPD did their own study (.pdf), finding that crashes, were indeed, down at intersections. They also debunked reporter David Goldstein. "Mr. Goldstein's analysis did not distinguish whether the traffic collisions occurred in proximity to the intersection or mid block... The data provided to Mr. Goldstein listed all traffic collisions without qualification. This included collisions that occurred mid-block or on private property, as well as pedestrian, bicycle, hit and run, sideswipe and several other traffic collisions not relevant to the [Photo Red Light] Program."