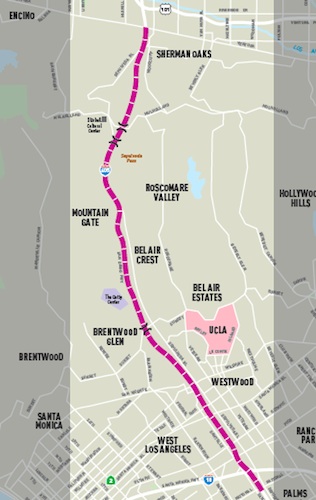 When it comes to the three-year billion dollar construction project to bring carpool lanes to the northbound 405 Freeway over the Sepulveda pass, Metro has a Twitter account, the world's easy tool to deploy information at a moment's notice, but they don't use it all the time. Nor can you trust their press releases about when closures will occur, finds Eric Spillman at KTLA.

"All morning I reported on our air that the closure of Sepulveda Blvd. in Westwood was supposed to start at 9 AM," Spillman writes in his blog about last Friday. "It's what we were told in a press release put out by Metro and Caltrans. And it matters to thousands of people who use that road as a shortcut between the Westside and the Valley. Behind me was a flashing sign warning drivers that the closure would be in effect today. Then at 8:45 AM, some guys in hardhats and yellow vests pulled up. They changed the date on the flashing sign to 3/23/10. Just like that. That's how we learned the closure would be delayed for four days."

We've felt Spillman's pain, too, in the past. Metro will say one thing and then you're driving on the freeway experiencing another thing. It's embarrassing to say the least. And last Friday's change was never even updated on Metro's 405 project Twitter account. In fact, the major closure was never announced there either. Construction notices are also supposed to be found on their project website.

Peeved, Spillman calls Metro demanding answers on why one billion dollars can't produce some better communication. Thankfully, Metro admitted there was problem that needed to be addressed. As Spillman said, "Let's hope so."