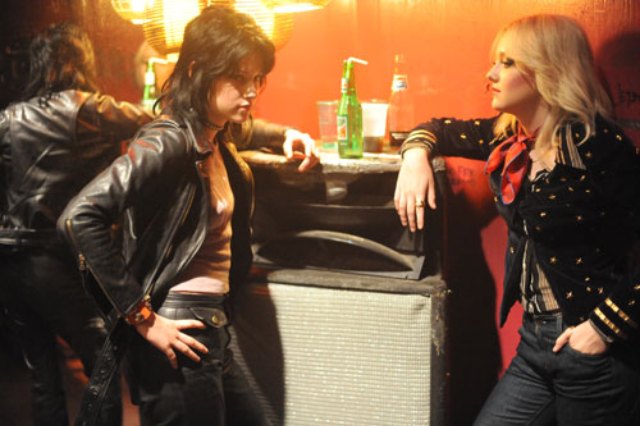 Kristen Stewart fidgets with the hem of her cropped black pants, her knees against her chest as she answers questions, her heels up on her chair. Dakota Fanning sits next to her. She’s composed and alert in a lavender tank top, taking in everything around her, eyes lingering over the scribbled notes of the reporter sitting next to her. The girls are promoting their latest film, The Runaways, which tells the story of the first all-girl rock band of the same name. At the center of the film is the friendship between Joan Jett (Kristen) and her cherry bomb lead singer, Cherie Currie (Dakota). LAist wanted to know about the actresses’ friendship off-camera and if an onscreen make-out scene made anything feel weird between them.

Kristen: It’s weird to talk about your friends when they’re sitting right next to you.

Kristen: We’ve been doing it in interviews all day. (looks at Dakota) Go for it. Go.

Dakota: Oh, okay. Throw me under the bus a little bit. (laughs) I don’t know. Working this closely with someone you can’t help but bond with them and it really helps if you actually like them and get along really well and can become really good friends. I haven't really done a lot of movies with people close to my own age to have a good friend like that, so I was excited to do that. I couldn't have asked for a better person to do it with.

LAist: You guys got to get extra, especially close during the filming of this movie. So, how was that?

Dakota: I answered the last one, sorry.

LAist: Who, me? (Dakota and I exchange glances and look back at Kristen)

Kristen: Now you both are. It’s so funny. Okay, sorry, um, it was cool… I didn’t mind… No, the way that it happens in the script is so fun and natural and impulsive. They don’t have that type of relationship that’s like, “Ooh, they’re closer than normal.” They’re just best friends and it was just that time. So doing it was, you know…

LAist: One of the first things you did to get into character was cut your hair off.

Kristen: I needed to feel sweat dripping down my face. I would have felt like a fraud if I had a wig on. I’ve worn wigs in the past and they can look great. A lot of actresses won’t work without them. Dakota’s wig looked amazing, she worked really well with it. With the wardrobe and the hair it slowly becomes like a reality that you can believe. It can feel like this huge job, like, “How am I ever going to approach this?” And then you get on set and it all comes together. I can’t really bring myself to do anything until I’m on set. We didn’t see her do “Cherry Bomb” until we shot it. We were all floored. It was so cool.

LAist: Did you guys watch old videos of the band performing to prepare for your roles? I know I went home and watched them on YouTube after seeing the movie.

Dakota: You compared them, ooh.

Kristen: Yeah… you can do that…

LAist: No, you guys did such a good job.

Dakota: Yeah, there’s a lot of footage of them performing. When I first read the script I wasn’t familiar with who they were and who Cherie was. I had heard of Joan Jett and was familiar with her music, but not really “The Runaways.” So, I looked up their old videos and pictures of them and when I saw her perform “Cherry Bomb” I knew that I really wanted to do that.

LAist: Joan and Cherie had a complex relationship and in the end Cherie decides to leave The Runaways. Did you ever think Joan should have worked harder to convince Cherie to stay?

Kristen: The way their relationship was, they are very independent people and they know themselves. I think it’s a cool thing to watch two very different people choose paths that are ultimately going to make them both happy because it’s not a copout what she is doing. It’s not like, “Try harder… to do drugs. Try harder to do something that’s not making you happy.” Joan would never do that.

The Runaways is now in theaters