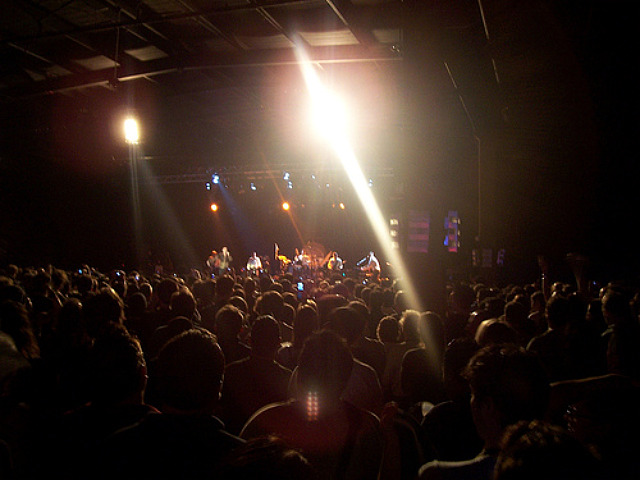 It was almost as if the arrival of GWAR sent out a silent signal to all those who brought their own costumes to SXSW to don them and let their freak flags fly. The esteemed rocker monsters (aliens? beasts?) were walking around 6th street with their spiked appendages flapping in the breeze amongst the masses, delighting most of us, and scaring a few children. After that moment there seemed to be at least one guy in costume at every show. I saw lion headdresses, horse head masks, and even one full on bear suit (which in the heat must have been sweltering). It was almost as if the festival had seen GWAR and thought, "Oh game on!"

I started the day at the LA Record day party which was at a store on 2nd St. called Design Within Reach to catch The Mynabirds, who had released one gorgeous single on their Myspace page, "Numbers Don't Lie," and nothing else. Needless to say, I was dying to know if the rest of their set was as good as that one offering and am happy to report that it was. Despite the odd acoustics (it was a store after all) and the lack of strings that are featured on the recording, lead singer Laura Burhenn's low husky voice came through the speakers so beautifully that Dusty Springfield have would sat up and noticed. It's the kind of rich voice that makes you turn your head and go "Hey, what is that?!" The five piece played a stripped down, country fried indie pop reminiscent of Neko Case, but a little less intense. I caught up with Burhenn after the set, and she assured me that after the album drops in April, Los Angeles will be featured on that tour.

After the set, I grabbed a couple street tacos with hot peppers and showed up at Klub Krucial covered in orange grease for the Gorilla vs. Bear day party. I arrived just in time for Sub Pop's new signees Dum Dum Girls, who took the stage clad in little black dresses edged in lace and striped black stockings, and proceeded to rock the house. With giant fuzzed out guitars contrasted with pretty distorted harmonies, which sounded like angels caught in a tunnel, the girls proved that as lo-fi pop goes they make some of the best. It's the kind of music you would put in your car if you woke up somewhere you didn't know, possibly someone's house or a bush, covered in grime, with red lipstick smeared on the pillow, and possibly with a surprise bruise. It's tough girl music with pretty centers and hard edges.

The last show of the night was located in the Central Presbyterian Church which had the most magnificent acoustics I've heard all festival. It's a wonder that they don't build more theaters shaped like churches, because the sound is just unparalleled. Because Band of Horses was playing the line to get into the venue was out the door and around the block even with the "badge only status" of the show. (Which led to a number of hilarious fights between security and indignant badge wearers who were used to getting into everything. People actually used the phrases "Don't you know who I am?" and "But I paid for this!") Fortunately I somehow managed to squeeze in and caught half of Band of Horses' set, which sounded larger than life in that holy arena. Ben Bridwell's usually powerful voice sounded like the voice of a giant. I don't know why they even bothered with speakers. Their singles "Funeral," "Great Salt Lake," "No One's Gonna Love You" brought the crowd to their feet moved by the power of the sound.

It was really beautiful, but Band of Horses are always lovely. What I was curious about was who came afterward, the mysterious Swedish duo jj who appeared out of nowhere this summer with their haunting single "Ecstasy" off their sophomore album n° 2. I couldn't imagine how the hell they were going to take such complex electronic symphonies and play it live successfully. The answer was pretty simple: They weren't.

Elin Kastlander sat down in the middle of the stage with very low lighting, which made her mane of golden hair sparkle, picked up an acoustic guitar and sang a two numbers. She then put down the instrument, somebody in the sound booth cued the music, and she karaoked the whole set. The other half of jj, Joakim Benon, was nowhere to be seen. Behind Kastlander, images were projected of foxes running in the desert, men in business suits dancing, and white mysterious figures with scissors. It was both an entrancing and seriously disappointing set. If you closed your eyes, it was great. Her voice was magnificent. It soared into the rafters and filled your heart with sadness. But as entertainment, the show was awful (unless you like watching women sit on chairs and sing along to a track). And God help you if you see jj at a venue without chairs. Half the crowd would fall asleep in five minutes flat. Which is a real shame because jj's n° 2 is a fantastic album, but until they get a show together, any kind of show, I would pass.

Stay tuned for tomorrow's round up of best new acts...

But when are they playing here?


Dum Dum Girls will be playing at the Echo Curio on April 18th.

Band of Horses will be playing the Greek Theater on Sept 25th.

jj will be playing the Echoplex on April 17th.

PPS. I have been strict in only mentioning the good acts I saw in Austin TX. If you're curious about the horrible things I heard, please drop me a line, and I'll send you a novel sized tome full of repulsion and disgust.