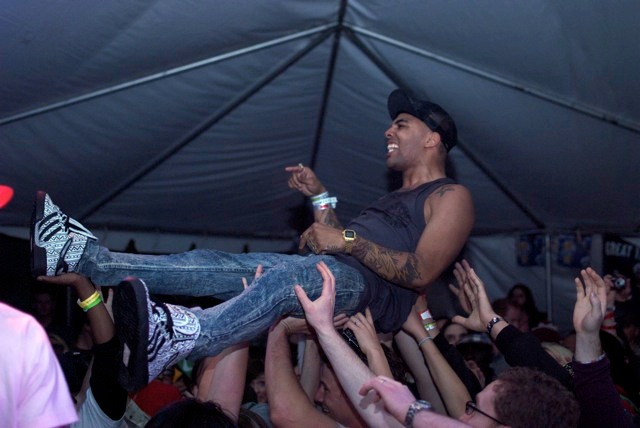 First of all, it’s more madness this time around than I remembered. Maybe it’s because I’m getting older and lamer and my half-Irish liver can’t quite swing St. Patrick’s Day with as much gusto as it once did. Or maybe it’s because Molly and I, in an effort to bring recommendations, recap, and (SXSW) reality to those of you who couldn’t make it this year are trying to see as many bands as humanly possible each 24 hour period.

All I can say is that my Excel spreadsheet is failing me miserably, my shutter finger is bruised, and I’m having the time of my life. Take this as an open invitation to come join me next year. You’ll not regret it (as long as you bring ear plugs, sunscreen, and comfortable shoes), I promise.

My travel partner and I decided to ease into the day with the Lawn Party at the French Legation Museum on San Marcos. Rolling grass, free beer until 3pm, popsicles, vegan BBQ, and a great line-up. We caught Califone, Dylan LeBlanc, The Antlers, Zola Jesus, and Real Estate before meeting up with Molly (You can check out her coverage here) and deciding to hit the Filter Magazine Party in the hopes of catching Miike Snow. On our way down 6th, we caught a bit of rock and strings blasting from an open window and stumbled upon Broken Records, a gem of a find. A mile (and a plethora of questionable street buskers later) we arrived to see Uffie (cute but meh) and Sweden’s Miike Snow, who, despite technical difficulties delivered a frenetic dance rock performance that had the crowd freaking out and subsequently making the rest of this trip gravy for me.

After grabbing some BBQ at the Green Mesquite (Oh, hello pulled pork), I bounced around and caught Drive By Truckers at Stubbs and Holy Fuck at Mohawk. All great showcases, but the place to be was the Beauty Bar Backyard for Iheartcomix/Green Owl’s party (even Bill Murray made it out to the small, cramped tent). I found my way onstage to shoot the insanity that was Hollywood Holt, Ninjasonik, and (my faves) Shout Out Out Out Out and almost died in the process. Before I called it a night, I caught a bit of Camper Van Beethoven and Cracker for old times’ sake. Good stuff, even if David Lowery took 220V to the mouth from an electrical SNAFU that resulted in a (well-deserved) rant. Fell into bed feeling happy, sore, and entirely regretful that I missed Band of Horses, The XX, Deer Tick, Midlake, The Love Language, The Crystal Method, GZA, and You Say Party! We Say Die!. Ah well, that’s what today is for.

Word and photos provided by LAist's own Melissa Moore. You can keep up with all of our adventures and misadventures at SXSW here.