A Busway for Van Nuys Blvd. and More Rail Service in the Valley? 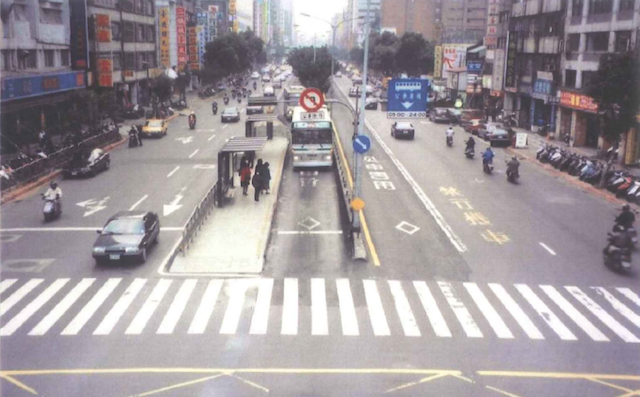 An example of a median busway in Taipei, Taiwen | Image via LADOT

A study of north-south corridors in the San Fernando Valley concludes that the city of Los Angeles and Metro should further consider a median busway along five miles of Van Nuys Boulevard and developing more rail service, including linking the North Hollywood Red Line station with the Sylmar Metrolink Station in the Northeast Valley.

The recommendations come out of a study seeking solutions to improve north-south transit corridors in the Valley along the Reseda, Sepulveda, Van Nuys and Lankershim/San Fernando arteries—all connect to the Orange Line—in three phases. Phase 1 includes signal re-timing, lane restriping and bus stop relocations as well as the already-in-servce 902 line. Phase II entails capital improvements like roadway widening and transit enhancements at bus stops. Phase III would be long-term improvements such as constructing a five-mile median busway between Burbank Boulevard and Plummer Street and extending the Metro Red Line from its current terminus in the NoHo Arts District to Sylmar.

Although a median along Van Nuys Boulevard would increase speed by 15%, city transportation planners are concerned with how it would affect other modes of transportation. Their research "indicates that full-time exclusive median bus lanes create policy trade-offs due to narrow roadway widths in most of the corridor segments where bus lanes are most needed to improve bus speeds." However, the "busway could include underground grade separations at major cross streets to avoid significant traffic impacts, It could also include a tunnel segment of approximately 1-mile under the Van Nuys Civic Center between the Metro Orange Line and Vanowen Street."

As for rail service, LADOT notes that the northeast valley is home to a large transit dependent population but no mass transit rail service is in the area. Commuter rail can be found at the Sylmar Metrolink Station, which may be designated as a High Speed Rail station, but other than buses, nothing connects riders to other parts of the city. Staff say a rail solution should be studied, including the possibility of light rail.

Funding for the project would come from various sources, including Measure R. The corridors are part of Mayor Antonio Villaraigosa's 30/10 plan. A north-south extension of the Orange Line is already underway along Canoga Avenue in the West Valley and is expected to open in 2012.

The study will be discussed at next week's City Council Transportation committee meeting. The full report can be found here.