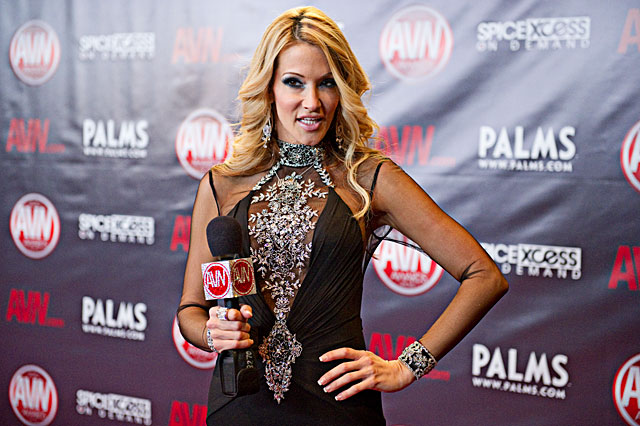 Jessica Drake or "jessica drake" as she prefers to have her name appear in all lower-case letters (she says, "It's actually trademarked." Adding, "I just prefer it that way, it's cuter.") is an adult film actress who has appeared in hundreds of films. Along with performing in front of the camera, the AVN Hall of Famer has also worked as a writer, director and several other roles behind the camera.

Tonight the Texas native will be appearing alongside fellow Wicked Pictures star, Kaylani Lei at the Pleasure Chest in West Hollywood from 5-9 p.m. Later this month, the 2005 AVN Award Winner for Best Oral Scene will be returning to the Pleasure Chest to teach a workshop on the topic of blow jobs.

Jessica took some time out of her busy schedule to talk to LAist about tonight's appearance, her days as a food critic, a prosthetic leg-waving incident, condom use in the adult industry and of course, blow jobs.

1) You'll be appearing at the Pleasure Chest on Thursday alongside Kaylani Lei. Could you tell us a little more about what you two will be doing?
I go to the Pleasure Chest on a fairly regular basis both for work, picking up props and supplies, and also for my own personal life. The past few times I've been in there I've been recognized by some of their employees. Finally, I asked them how come they recognized me because they don't have a ton of my movies in here. That kind of began a conversation between me and the management and marketing. I told them I haven't done that many appearances here in Los Angeles but every time I have one it's usually a tremendous turnout. I said we should definitely do something, so we kind of collaborated. And not only am I doing this signing on Thursday, but I'm also their newest addition to monthly seminars. I'm their newest sexpert. I'm really happy about that. I think it's a great opportunity to get out and meet fans and reach out to that couples' fan base and women as well. I know a lot of women are going to participate in my first workshop later this month, so I figured this signing on Thursday would be a great way to please the guys. 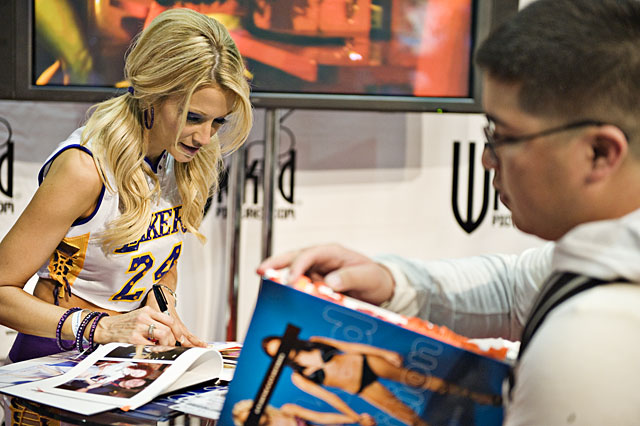 2) What is the strangest interaction you've ever had with a fan?
It actually took place at a strip club. I feature dance not only all over the U.S. but also all over the world. I happened to be on the east coast and I was finishing up one of my shows. I do giveaways at the end of the show, I give out free t-shirts, hats and DVDs. I was just waving around a t-shirt on stage at the very end of my show. I do a lot of crowd work, like I'll split the crowd up and get them to make noise and get them to all kinds of crazy things. I'm waving the t-shirt and all of the sudden I see a fan who had spoken to at great lengths before and had done dances for, jumped up on a bar stool and waved his prosthetic leg. I've never seen anything like that. I had to walk over to him to give him the t-shirt and when I did, I said, "you really should have waited for the DVD, you wasted that move on a t-shirt."

3) On your website you have a great photo with Mike Tyson. Do you have any celebrity fans?
I have a lot of pictures with me and celebrities on my website. Yeah I do. I'm not much for kissing and telling but I will say I met Chris Brown at the World Music Awards a few years ago before he had his bad reputation and he was very outgoing and friendly towards us.

A lot of the time we get to do red carpet events with Wicked, they really afford me a lot of high profile opportunities. They sent me to the Grammys two years ago and I walked the red carpet. The clip of me ended up on David Letterman's show because of it.

I'll be at celebrity poker tournaments, golf tournaments, parties and one of the things that ends up happening is they're (celebrities) looking at me pretty much as much as, or more than I'm looking at them. I know that they recognize me. I've had a lot of celebrities come up to me and tell me that they're big fans. I've had few MySpace me. I thought that was odd because I didn't think that it was the actual person. Celebrities have always been really cool. I don't have any wild sex tapes coming out with me and a celebrity because I just wouldn't do it. I'm not saying I wouldn't have sex them, I just wouldn't tape it and put it out there.

4) You also direct. How much has your time in front of the camera helped your work behind the camera?
I would say that everything I've ever done in this industry has prepared me for where I'm at right now. Like I said, I'm very fortunate to have a contract with a company that's as great as Wicked. I think we're definitely at the top of our game right now. They've allowed me to grow in more ways than just being a performer. About three or four years ago, I started out writing for them. I've written about a dozen movies for them. When I was doing that I was also doing about everything else on the set. I never wanted to be the girl that just said, 'Hey, today I'm going to be a director.' I wanted to be the girl that said, 'Hey, now that I know how to do this...' I was an AD for three or four years. I've done everything on a set. There's no job on a set that I think I'm too good for. I've cleaned up after people. I've been the condom and lube girl. I'm not too good to do anything on the set. I think that just doing all of that has been great practice for the transition into being a director.

That being said, I'm still in love with performing. I don't have any plans to quit performing any time soon. I just want to bring more of me to my movies. I want to bring as much of me as possible and I think that being the director and having that platform is creative control. I love creating. To see it all come together, it makes me very proud. I want to do as much as I can and get as much experience as I can while I can get it and while the opportunities are there.

5) Can you offer a tip here for those who won't be able to attend your workshop?
I was actually doing a little bit of research for this seminar and I polled hundreds of guys and I asked them, 'What are the three most important words were when it came to blow jobs?' Repeatedly the answers I got over and over were these: effort, technique doesn't matter, willingness and love to do it. Basically, overall the opinion that I got from guys is they just want a woman to be excited about it. To just try. To just make the effort and have fun with it. I polled them on whether spit or swallow was important to them. I'm going to go with about 80 to 85 percent said it absolutely doesn't matter as long as they're getting a blow job. I find it really interesting to me. When I'm polling these guys, I'm doing it in a very public forum. I'm either doing it in a bar or night club. I'm doing it on Twitter. I'm doing it on my website. I'm asking very frank questions. Women are going to be surprised because the answers are not what they might imagine. 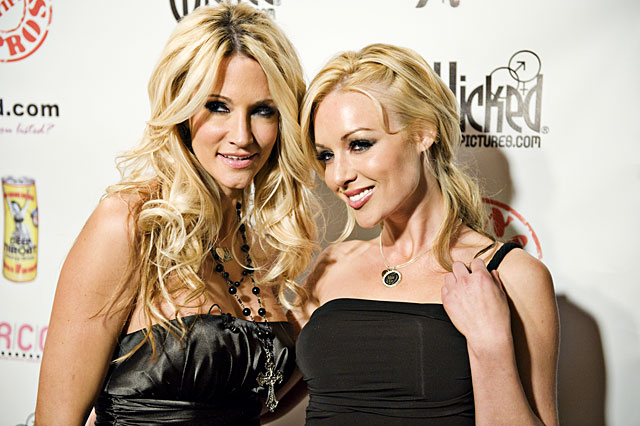 6) There was a story in the LA Times earlier this week about a possible law change that would require condom use in adult films. What are your thoughts on this issue?
Because I work with an amazing company like Wicked, I've always been for my entire career 100 percent condom only. I think that it's very important for me to always use a condom when I have sex. Also, I have a very short list of people that I work with. That being said, while using condom 100 percent of the time is extremely important to me, I don't really agree with any type of government decision that enforces their beliefs on everyone. At the end of the day, it has to be your own decision what you're doing with your body. For me, the right decision is to use condoms but I don't think that me nor anyone else should be able to make that decision for someone else.

7) What do you enjoy most about living in Los Angeles?
The thing that I enjoy most about LA is the diversity. Any different kind of mood that I'm in, there's something to do here. I love to go to the beach. It's really cultural. It definitely is a melting pot. I'm from Texas and my first week here, I had seen more than I had seen my entire life living in Texas.

I fancy myself a bit of a food critic. A while back I used to write for a publication called Beverly Hills Outlook, I did some restaurant reviews and that allowed me to get acquainted with a lot of restaurants in town.

LA's great because there's so much to do and you never know who you're going to meet here. When Kid Rock performed at the Hollywood Bowl, I was one of his dancers. Where else could something like that happen? It's just crazy the amount of opportunities that are here.

Meet Jessica Drake and Kaylani Lei tonight at the Pleasure Chest (7733 Santa Monica Boulevard, West Hollywood, 323-650-1022) from 5-9 p.m. For more Jessica, go to jessicadrake.com, wicked.com. You can also follow her on Twitter @thejessicadrake. In addition to Jessica's workshop, The Pleasure Chest offers several other workshops. 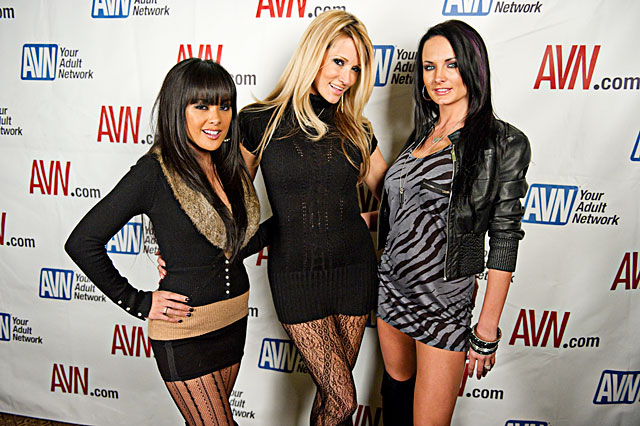