Seven Questions: Roland Lazenby, Author of Jerry West, The Life And Legend Of A Basketball Icon 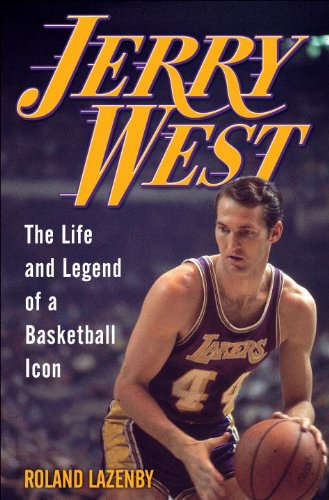 Roland Lazenby is a writer who's authored or contributed to 60 books, mostly about sports. Lazenby has written two books about the Lakers franchise, as well as books about Phil Jackson and Kobe Bryant. Additionally, the Virginia Tech professor also runs Laker Noise, a blog about, well, the Lakers.

Jerry West, a man who Lazenby says he's been hearing about "for as long as he could understand language" is the subject of his latest book — Jerry West, The Life And Legend Of A Basketball Icon, which was recently released and is available in bookstores now. Like West, Lazenby too is a West Virginia native. Lazenby's father, for whom this book is dedicated to, worshiped West. Due to this personal connection with the Laker great, Lazenby calls this book, "the challenge of a professional lifetime."

Lazenby definitely delivers on that challenge. His book provides an in-depth and entertaining look inside the life of "The Logo". The author digs up a mountain of information on the former Mountaineer, from the roots of the West family tree to the west coast love fests that took place in the Lakers locker room.

The author took some time to talk with LAist covering Jerry's quest for perfection, Kobe's time practicing how to miss a free throw, those locker room sex stories and much more.

1) In the introduction of the book, you wrote that Pete Newell, who coached Jerry West on the USA national team at the 1960 Olympics, told you "to understand Jerry, you first have to understand West Virginia." You, a West Virginia native as well, called that "the challenge of a professional lifetime." Why did you say that?
I sort of traveled the road through my own family. A lot of the stories about the West family are similar to the stories I've heard about my own family. There's a lot about West Virginia that's mysterious. Even going back in the centuries. Why was it empty?

There was a story about my book in the Charleston newspaper, and some of shock for them was that Jerry was the kind of person who would use the f-word. Wilt (Chamberlain) once complained that Jerry is treated like Jesus Christ. He has a level of reverence that is, in some ways, hard to fathom. In other ways, it's so well deserved. He's a wonderful competitive heart. Just a lion. He is the competitive emblem for all of basketball. I think that's much deserved.

It was challenging because there are so many things that come to you once the book is finished. For example, I got a photo of Jerry as an eighth grader that I didn't get until just recently. Also, Jerry was a sports reporter for his school newspaper and I just got a copy of his writing as an eighth grader. I'm going to make use of this stuff that really should have been in the book on my blog. It's like a flood of information has come my way since I finished the book.

2) In the first chapters of the book you cover in great detail Jerry’s family history and the impact coal mining had on the state of West Virginia, when you first decided to write about Jerry West, did you envision that these would be your first two chapters?
Well, no but context is such an important thing though. Jerry has been quite a figure in the landscape of Los Angeles and yet no one has ever really known the nature of his background. The truth is in all the details. It's a journey that so many families traveled in the early part of the 20th Century -- moving from a farm life, from outhouses to indoor plumbing. But there's also this fabulous nature about Jerry West's family history, like the fact that his ancestral grandfather was Lord De La Warr who financed Jamestown.

3) When did you first recognize that Jerry was such a complex and mysterious character?
The first time I interviewed him. You take things beyond basketball and that's part of the journey and part of the fun of being a sports journalist. Chuck Daly once told me "The games are simple, the people who play them are complicated."

I was like a lot of young guys when I started writing about basketball, I was looking at stats and match-ups. I took that mentality into a three hour interview with Jerry. I was just grinding him through all of these experiences. I look back at that first interview I did with him years ago and I can tell it's killing him. I'm oblivious to it. If you're going to stay in the business of sports writing, you become aware of nuisance and context.

4) Jerry’s obsession with perfection is one of the major themes of this book. Do you think his inability to watch Lakers games while he was an executive is the greatest example of that obsession?
Actually I think that it comes down to skills; the skill level that he possessed. When he watched Kobe Bryant in that workout and he saw those skills; only someone who understands what it's like to possess such a level of skill can recognize it.

Not every basketball player has that. It's the product of work and work and work and not being satisfied. I remember watching Kobe in the Forum practicing missing free throws, you know where it would just hit off the front of the rim perfectly for end of the game situations where you're down and need to rebound a missed free throw to make something happen. Only a perfectionist would spend hours practicing missing free throws.

The vast majority of people are not perfectionists. Most perfectionists don't make it to adulthood because it's such a destructive trait. I love that Jerry got this from his mother, a woman who lived in this narrow little world with very few options. She focused everything on cooking and cleaning and that flowered into this competitive freak that was Jerry West.

5) The locker room sex stories from the Magic Johnson era that can be found in this book seem to have caught the attention of the media. Weren't these same stories included in your previous books about the Lakers?
They were, but that was before the age of the Internet. People weren't blowing this kind of information up like they do now. A team official leaked that information to me in 1992 when I was writing a book called The Lakers.

Magic was one of these guys who was determined not to have sex before a game and wanted to have sex immediately after the game. Magic came to Los Angeles as a teenager and Los Angeles is the world's casting couch.

It was largely east coast media that was ripping up these stories about locker room sex. The east coast doesn't understand Jerry Buss. I've said many times the owner of the franchise procures 18 year-old girls, dates them once or twice and keeps photo albums and isn't above boasting about his conquests. It's not something that the east coast state of mind quite grasps.

6) You’ve written books about Michael Jordan, Phil Jackson, Tom Brady, Johnny Unitas and Kobe Bryant. Due to your personal connection to Jerry; you're a native of West Virginia and Jerry was your father’s favorite player would you say that he was a your favorite subject?
This has been important for me. I guess you could argue that I ended up writing about sports because it was so important to my father, particularly basketball. I heard about Jerry West from the very moment that I could understand language. He's just that important. I guess that's why I consider it a professional challenge of a lifetime.

7) Have you heard any reactions or responses from Jerry about the book?
I have not and I'm eager to. He's doing his own book and his wife was very concerned that this was going to encroach. I think I've done a good job. It's a biography and biographies are very different from autobiographies. Jerry's going to have marvelous perspective. His book is going to be huge. There are so many things that he has to offer to that I'll never have a clue of. But on the other hand, a biography means I can talk to all these people that Jerry wouldn't talk to. I don't really see these as competing titles, I guess they are in some ways. I think one is merely a prelude to the other.

Jerry West, The Life And Legend Of A Basketball Icon was recently released and is available in bookstores and online. You can also read Roland Lazenby on his blog, Laker Noise and follow him on Twitter @Lazenby.