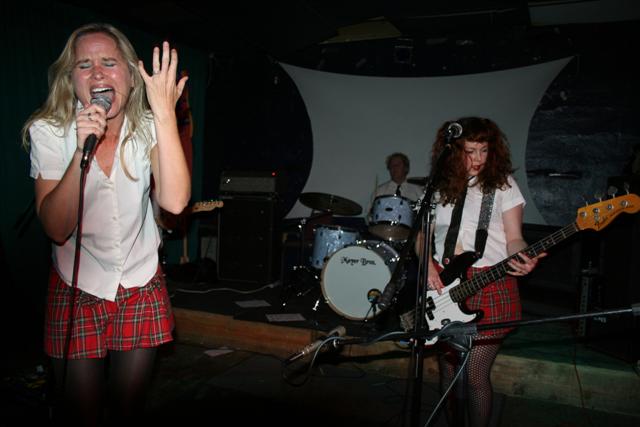 Photo by Elise Thompson for LAist.com.

It's the most wonderful time of the year again — Liquid Kitty's Winter Punk Rock BBQ! The lineup is raging this time around, with Third Grade Teacher making an extremely rare appearance. Sabrina will once again be speaking in tongues, freaking out the audience and rocking your face off. Also in an ultra-rare appearance, Santa Sabbath (with LAist's own Bobzilla on vocals) will be — yep, you guessed it — singing Black Sabbath-inspired Christmas carols (as Kitty honcho Dave Childs puts it, "Punk is perverse so, Christmas in February is exactly right."). You've got a little yuletide spirit left around somewhere; try looking under the couch.

Fans of the era when American indie rock was ruled by the acts on SST Records can check out the latest projects from legendary guitar hero Sylvia Juncosa (ex-SWA, To Damascus and leader of her own incendiary power trio), Spot (producer of many pivotal SST albums including Damaged and Zen Arcade, performing his own folk-fueled tuneage) and former Saccharine Trust/ Slovenly drummer Rob Holtzman (with his latest band Landfill, South Bay pub-punk the way you remember it.) There's also free hot dogs while they last, Frank Booth-approved PBR drafts for next to nothing, and best of all, no cover. Whether you want to recover your own lost innocence or just get started losing whatever innocence you have left, it's the place to be on Sunday.

Full schedule after the jump.

Jake LaBotz performs a blues set later in the evening.