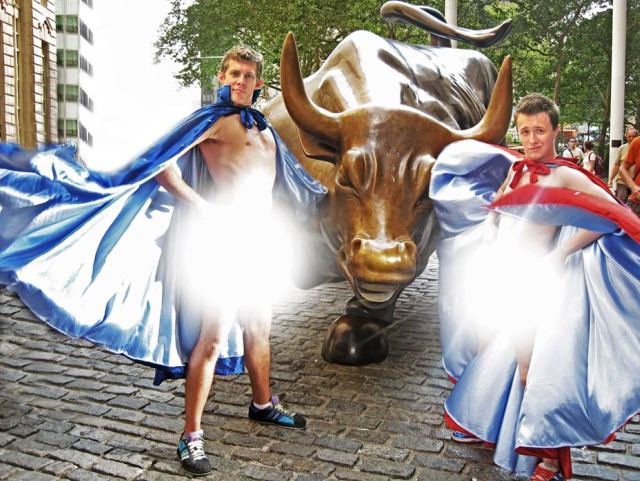 Meet Rich Binning (left) ... penis puppeteer. Chris Cannon is his partner in crime in Puppetry of the Penis at the Coast Playhouse.

After we saw Puppetry of the Penis last week, our curiosity was piqued. How does one become a puppeteer? We sent over a few questions to Rich Binning to see how he got his start in doing dick tricks for a living.

How did you get your start in genital origami?
It was a college party trick of ours because in high school Chris saw the show in Portland and bought the 'how-to' book. He taught me some tricks, but we never imagined we'd be traveling the world with it. We just liked to give our friends a good laugh.

How long have you been touring/with Puppetry of the Penis?
We did a nine-week run Off-Broadway last August, and we've been on the road since then.

How does it not hurt?
Don't get me wrong; it can be a very sensitive area but a man knows his body and we know where we can and can't squeeze too hard. If a penis is not erect, you can pretty much do anything with it, it's the testes that are tricky.

On stage you mentioned that you and Chris went to school for the performing arts?
Yes, it's very true. We both have BFAs from the Conservatory of Performing Arts at Point Park University in Pittsburgh where we studied musical theatre. We're not exactly sure how the school feels about our jobs, but then again they do have our headshots hanging up in the hallway!

Is there a typical audience member? How's the West Hollywood fan base treating you?
The LA audiences have been amazing for us. On the road the typical audience is groups of women ages 18-50, but in New York and LA it's a lot more eclectic.

What did your wife and mom say when you got the part? When they came
to your show? (I'm assuming they have.)

Both my wife and my mom have been supportive from the start. My wife operates the camera that projects everything onto the very large screen, so it's great to have her here in LA with me. My mom flew to New York to see it and then drove to Chicago to see it a second time.

What's the most memorable moment so far on stage with Puppetry? We once had a guy so excited to do the hamburger on stage with us that when we invited a girl to come on stage to do the "fruitbat" he came running down the aisle completely naked. We had to awkwardly send him back to his seat where he remained naked for the next 10 minutes until it was time for any interested guy to join us onstage to make a hamburger.

What advice can you give to those guys who are hoping to improve their own penis puppetry?
Same way you get to Carnegie Hall, practice!

Puppetry of the Penis runs through March 28 at the Coast Playhouse.