Theater Review: Puppetry of the Penis at the Coast Playhouse 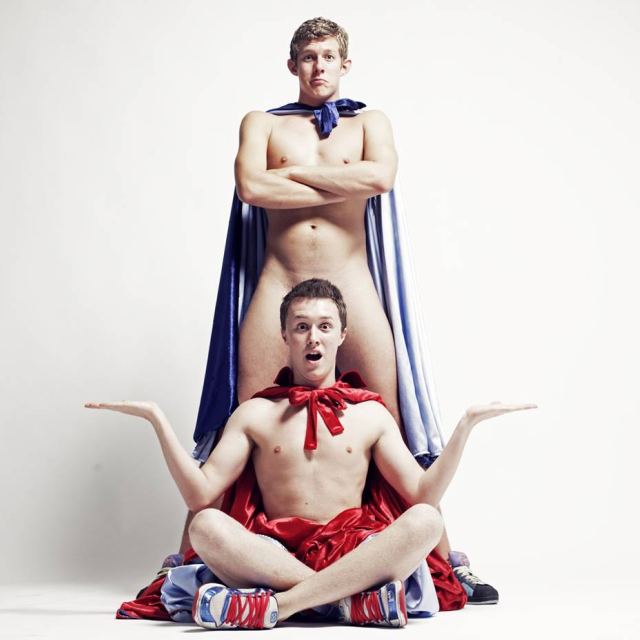 Puppeteers Rich Binning and Christopher J Cannon of Puppetry of the Penis. Their 'puppets' are hidden away,

Puppetry of the Penis, now playing at the Coast Playhouse through March 28, doesn't exactly use puppets in the traditional sense. Maybe sock puppets—just without the socks.

College buddies Rich Binning and Christopher J Cannon are the two puppeteers on the Los Angeles run who've been trained in "The Ancient Australian Art of Genital Origami." In other words, they've taken what some guys do for fun to a whole new level. To put it even more bluntly: The duo are on stage for 45-50 in nothing but their birthday suits and Nike high tops playing with their penises for a crowd that's half-mesmerized and half-weirded out. If that's your definition of a good time, then get to the Coast Playhouse before the end of the run.

Once over the schlong shock factor, the audience settles in for a night of good, old-fashioned parlor tricks, where the two use their entire manly nether regions to create penile installations like "The Brain" and "The Eiffel Tower." There were a number of food references as well, which caused a few waves of queasiness in the audience. Personally, we wished they would have called the hot dog trick something else besides the "Dodger Dog."

There are several references to Australia in the show, paying homage to Simon Morley, an Aussie who conceived the show in 1996. Binning and Cannon playfully bantered onstage while presenting the audience with their interpretation of Ayers Rock, the boomerang and the difficult- to-watch didgeridoo with Binning actually playing his the instrument.

Needless to say, Puppetry of the Penis isn't for everyone. (Though we did spot a few people with their moms in tow. Seriously.) The two puppeteers have a likable camaraderie, and if you can get past the initial awkwardness that you're in a theater watching dick tricks, you may be pleasantly surprised like we were--being entertained and a little grossed out simultaneously.

And here's a tip if you want to satisfy your curiosity factor and see the show live: Avoid sitting in the front row and the aisles if you don't want to be involved in inadvertent audience participation. It might be a little too close for comfort. Just sayin'.

Each show opens with a comedy set, and on Sunday night we were treated to saucy stand-up by Rachel Feinstein. A great warm-up for what came next.

Puppetry of the Penis: The Ancient Australian Art Of Genital Origami at the Coast Playhouse in West Hollywood through March 28. It plays Wednesdays and Thursdays at 8 pm; Fridays and Saturdays at 7 pm and 9:30 pm; and Sundays at 5 pm and 7:30 pm. Tickets are $39 Wednesdays/Sundays and $45 for all other performances.