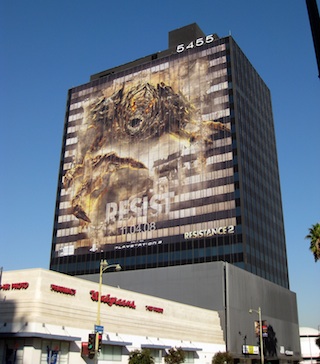 Photo by aharvey2k via LAist Featured Photos on Flickr
Supergraphics, those humongous advertising sheets that cover the sides of buildings and covering windows, are the focus of a major move today by the Los Angeles City Attorney's Office. 27 defendants are named in a civil law enforcement action seeking an injunction, penalties and other remedies for erecting illegal supergraphics, violating the city's permanent ban on supergraphic and off-site signs, the California’s Outdoor Advertising Act, the Unfair Competition Law, public nuisance laws and other state laws and ordinances.

The complaint not just seeks the removal of 12 supergraphics around Los Angeles, but also an injunction "to prohibit the sign companies from engaging in the further proliferation of these unpermitted, unsafe and prohibited forms of advertising."

Fines sought are high, up to $5,000 for each day an illegal supergraphic or off-site sign was in place, placing the total around $10 million. Additionally, $10,000 is sought for each sign adjacent to a freeway plus $100 for each day after the signs were deemed illegal by Caltrans, per the Outdoor Advertising Act. And the big zinger is that the City wants all profits made by the signs to go to city coffers.