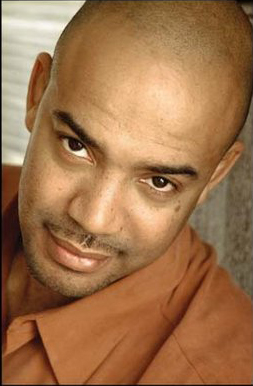 Comedian, Doug Williams just finished his fourth season as Executive Producer & Host of "Martin Lawrence Presents 1st Amendment Stand-Up" which airs on Starz. He has appeared on such TV shows as HBO’s "The Mind of the Married Man," Comedy Central’s "Premium Blend," and is a favorite on BET where his first one-hour special aired, and is a regular on Club Comic View. He is also executive producer on the talk show "Way Black When."

Williams, who has appeared in films like The Nutty Professor with Eddie Murphy, My Girlfriend’s Back, Speed-Dating, Lean Like a Cholo: The Movie and Fanaddict, recently released his comedy album Doug Williams Live. The album, which is available on Amazon and iTunes, is a mixture comedy performances and prank phone calls.

LAist had the chance to talk with Doug, who you can catch on "Comedy Central Presents Doug Williams" tonight at 11:30 pm, about working in LA, feeding off the energy of his audience, Wanda Sykes' "it's harder being gay than being black" comment, the infamous Emmitt Smith Roast video and much more.

1) What can we expect to see from you on "Comedy Central Presents Doug Williams" which premieres tonight?
This time I stepped out on a limb. I talked about things that are "controversial." I talked about gays comparing their struggle to the black struggle. To me, I don't think that's a fair comparison. But I did it in a humorous way, I don't think there's anything that's distasteful. I talk about the state of the economy and relationships. I kind of touch on quite a few topics.

2) Without giving it all away, can you tease for us your take on the gay struggle versus the black struggle?
Wanda Sykes came out of the closet and she kind of led the charge to say that the gay struggle was like that of the black struggle. She even gave an example of how she felt that the gay struggle might have even been more difficult than the black struggle. I just found a lot of entertainment value out of that. I don't want to give everything away but in the joke I say, gay people have a closet that they can go in and out of. But black people, we don't have a closet. So that's just a little bit of the road I traveled down on that topic. I'm not being disrespectful to the gay community because I'm sympathetic to any type of struggle.

3) You have a video on your Web site of you performing your "Relationship Football" bit and energy from that audience is incredible. How do you respond to a reaction like that? How does the impact the rest of your set?
I feed off the crowd. When you get a reaction like that, or you're getting laughs it lets you know that's something that they can relate to. It's like a team playing in front of the home crowd. The crowd is hype, they're making noise and you feed off of that. It just pumps me up even more because I know that I'm saying something that are really involved in, something that they're connecting with and they're really supporting what I have to say.

As far as what makes a great phone call, America is fixated on the unsuspecting person. You see all these things on YouTube or "Punk'd." America loves pranks. They love to see someone get caught off guard. Prank phone calls are just another version of that. People also love improv. There's no script involved, and the response and everything you see or hear is natural. It's non-scripted so everything you see is the truth. I thought it would be really funny to call some unsuspecting people and just run some things at them they wouldn't be expecting and catch their natural reactions.

5) What are some things you're looking for in a comedian for your show, "1st Amendment Stand Up"?
I don't necessarily do the picking, it's done by committee. I had to remove myself from that process because I'm a comedian and I was getting inundated with calls. I was making enemies, people were looking to me if there weren't getting picked. People weren't speaking to me. I said let me take myself out of the process. Now I do make some recommendations but that's about it. What they're looking for is a variety of things. Different things in regards to standing out as a performer: uniqueness, stage presence, someone who's up and coming. Then we mix that with some veterans, people who've done it for a while. They're just trying to find people who would be the right mix for the show.

6) When you do a Google search for "Doug Williams"+comedian one of the most popular results you'll come across is the video of your performance at the "Emmitt Smith Roast" which was interrupted by Jamie Foxx. How has that incident impacted your career?
A lot of people don't realize that that happened a long time ago. That was over eight years ago. Because of the Internet and other venues similar to the Internet, a lot of people see it for the first time and think that it could have happened last year or just a little while ago. I think a lot of people read more into it than it was. It was a roast, I'm not a roast-type of comedian. The situation just kind of caught me off-guard. I was new at the time. I was new to that environment. I was new to roasting. It's one of those things that happened and I'm better for it. It was a long time ago, I've learned a lot since then and I've come a long way since then.

At that particular point nobody knew who I was. I didn't have a show out. I wasn't really know as a comedian. I was really just trying to break down the door. I learned a lot from it. Here I am today. I have a Comedy Central special. I host the number one comedy show in the country. You live and you learn.

A lot of people are really confused by it because I have hair in that video. I've been bald headed for years now. People still want to come up to me and act like that happened last year, which is kind of flattering, I guess.They say you haven't changed much because I still look as young as I did then.

At that time, Jamie Foxx was an established well known comedian. Nobody knew who I was. It was a situation where no matter what happened, I wasn't going to get the best of him in that setting. Everyone knew him, nobody knew who I was. Like I said I've grown a lot, I've learned it. One of the good things about it is that video is so popular that it has really driven people to see what I'm doing now and get caught up with who I am in the present time.

The advantage of being here is you're where you need to be. This is the capital of entertainment. You're right in the thick of things in terms of being near the action. You're only an audition away from landing that big role or that thing that's going to break you out to the masses.