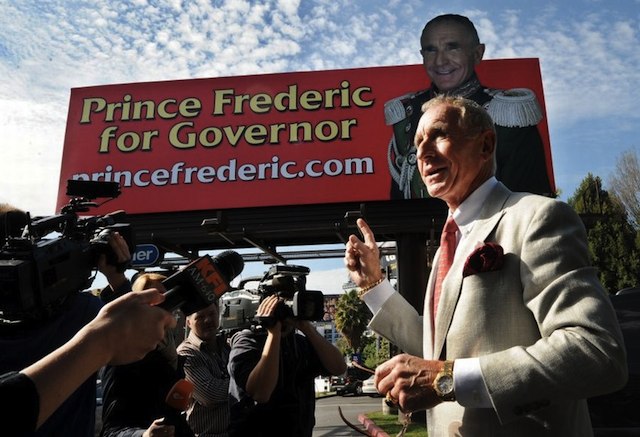 Prince Frederic von Anhalt, Zsa Zsa Gabor's eighth husband, is expected to officially file papers to run for Governor today, according to KPCC. Once completed, expect to start seeing his "Return the Good Life to California" campaign that includes a variety of ways to solving the state's budget woes.

Most notably, von Anhalt wants to have a "sin tax," which would add more taxes to alcohol and cigarettes, but also prostitution and marijuana, which he would work to legalize. "Marijuana is a big industry already," he told the radio station. "Let's legalize it, tax it, make some money and put less people in jail." An initiative to legalize and tax marijuana is already expected to be on November's ballot. Cuban cigars would become legal and taxable, under his plan.

Von Anhalt's past is sketchy at best, but he says it's time to focus on California's future. He apparently was born into a poor German family, but later adopted by a German princess who gave him the title of Prince Frederic von Anhalt of Munich, the Duke of Saxony. Some, however, say he paid for the title.

He recently had claimed he might have been the father of Anna Nicole Smith's baby after a 10-year affair with her, but parental tests later disproved that. In 2007, he said three women mugged him when police found him driving his Rolls Royce Phantom naked. He once sued Viagra, "saying the treatment for erectile dysfunction left him unable to perform unless he took the drug," but later dropped the case. His marriage to to the 93-year-old Gabor is his seventh.

His campaign website is translated into German and Spanish. "I'm running for Governor and no one can stop me," he says in a video posted on it.