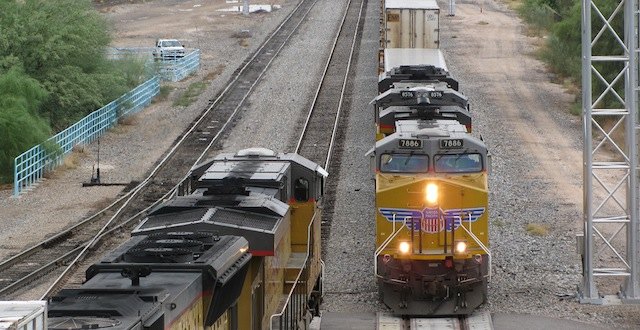 This morning the federal government announced funding (.pdf) for recovery act transportation projects around the country, including one in the Los Angeles region. It's not sexy like the funding Tucson, New Orleans, Dallas and Portland got for streetcars, but one it's important for the local economy.

Nearly $34 million was given to Caltrans for the infamous Colton Crossing in the economically stressed San Bernardino County. It's known as "the most significant choke points for freight moving into and out of the California ports of Los Angeles/Long Beach," according to the grant description. "Approximately 40 percent of all containerized traffic entering or leaving the United States passes through the ports of Los Angeles and Long Beach. More than 60 percent of the volume from these ports is moved inland through the L.A. Basin and the vast majority of this volume moves via rail over Colton Crossing."

The project will eliminate an at-grade crossing where two major rail lines—one east-west, the other north-south—cross, which at its peak can see more 100 freight trains passing through, causing a back up for not just fright trains and commuter trains, but motorists, too.

“This critical investment will create much-needed jobs in the Inland Empire while also helping eliminate a major bottleneck for freight moving along the Alameda Corridor to and from the ports of Los Angeles and Long Beach," said Senator Barbara Boxer, who supported the project, in a statement.