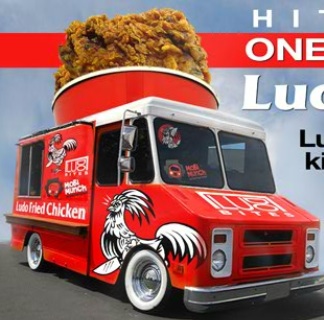 Via Ludo Leffebvre's website
What happens when you take one of the most creative chefs in town, put him in a food truck and add him to the line-up of the most buzz-worthy and anticipated food festival in town? You get some deep fried magic.

Chef Ludovic Lefebvre, the Top Chef Masters contestant known for his small bites dishes at pop-up restaurants around Los Angeles, will be serving up his famous fried chicken in boneless bite-size servings at the L.A. Street Food Festival on Valentine's Day weekend. Fans of Ludo should be warned, though, as this is a one-time affair. In true LudoBites fashion, this truck, despite being wrapped in his logo, will only appear this one time.

Scheduled for February 13th at LA Center Studios, the festival will feature over 36 street food vendors (and that list continues to grow) alongside a number of UniqueLA design vendors. General admission will cost $5. With that price combined with L.A.'s penchant for street food, expect a mass of people. For those who must get their grubfest on, there's a $30 VIP pass (it's nearly sold out, we hear) that guarantees entry, among other perks.