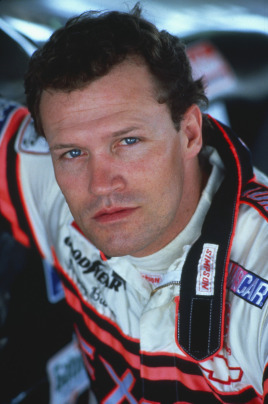 Michael Rooker as "Rowdy Burns" in Days of Thunder | Photo courtesy of Paramount Home Entertainment
LA has a diverse cast of characters. Whether it's the characters with stirring stories or interesting occupations or the people who are just simply characters, this town has them all. In an effort to get to know some of those characters a little better, we've created "Seven Questions with..." If you have a suggestion for a future Seven Questions subject send us an email.

Days of Thunder, the auto racing drama that gave us Tom Cruise as hot shot stock car driver "Cole Trickle," Robert Duvall as mentor/crew chief "Harry Hogge" and Nicole Kidman as brain surgeon/love interest "Dr. Claire Lewicki" is turning 20 this year. Yes, it was way back in 1990 when we learned that "rubbin' is racin.'"

To commemorate the film's anniversary Paramount Digital Entertainment, Sony, Toyota, NASCAR and TOYOTA Speedway at Irwindale have partnered to bring fans a Days of Thunder celebration being held at this weekend's NASCAR Toyota All-Star Showdown in Irwindale.

Fans will get a chance to take in a free special screening of the movie on a 40-foot large screen situated on the track. Movie and game night kicks off at 4:45 p.m.

Actor Michael Rooker who played the character "Rowdy" Burns in the movie has been named Grand Marshal of the NASCAR Toyota All-Star Showdown event and will introduce the movie and give the "start engines command" before the start of 225-lap feature race.

Michael, who just finished working on a film called Boulden! about the "father of jazz," Buddy Bolden, took some time out to talk to LAist about the movie, competing with Cruise, motor sports and his love for Los Angeles.

1) When the opportunity to be a part of Days of Thunder first came your way, did you ever think you'd be celebrating it's anniversary 20 years later?
I don't think anyone would have expected this movie to have the legs it ended up having. I was just down in Shreveport shooting a movie and I'm sitting down for dinner with another actor. He's on a TV show where the demographic is probably 14 to 18 year-olds. Four little 14 year old young ladies come up to our table and I'm fully expecting them to talk to him, but they turned to me and said 'Are you Rowdy Burns?' Dude, I just about died. They definitely were not my typical demographic. Why this movie has been successful and continues to be a success is because their fathers and mothers were probably fans of the movie and have been showing the kids the movie their whole lives. They took pictures with me on their cell phones. It was a thrill, a great thrill to see a new generation enjoying this film.

2) This weekend, as Grand Marshall of the NASCAR Toyota All-Star Showdown event, you're going to get to say "Start your engines." Have you practiced yet?
I have not practiced yet. No, no. Actually I did. I was in the shower when I realized maybe I should practice. So there I am with soap in my eyes at the same time I realize that I should practice my "Gentlemen, start your engines." I ended up saying a few other words too.

Are you nervous at all about it?
Not at all. I'm anxious. I'm anxious to get out there and have a good time with it.

4) Were you a big fan of NASCAR prior to your work on the movie?
I wasn't following the races around the country every weekend, but I was a pretty big fan already. I'm still a big fan and was a fan of any kind of racing. I really enjoyed watching demolition derby, and figure eight racing. I grew up in Alabama half of my life and there was a tiny little local track in my area. I really enjoyed going there growing up.

5) Your character, Rowdy Burns, is a classic sports film villain. Do you have any favorite sports film villains?
I have one other that I did from a baseball film that I did called Eight Men Out. I played 'Chick' Gandil. He was instrumental, along with another character named 'Swede,' in coordinating the 1919 World Series fix. He'd be my other favorite sports villain.

We had so much fun on Eight Men Out. You go in there as an adult to this movie and it's a job, but to get to play baseball for 8 to 10 hours a day. That was a total blast. A dream come true. The two movies that I always remember for having the most fun working on are Eight Men Out and Days of Thunder.

6) How much do you think Days of Thunder helped increase NASCAR's popularity?
I don't want to beat our own drum here, but I think this film changed the entire face of racing. Auto racing as a whole. Indy racing had almost fallen off the face of the map because everyone wanted to go to stock car racing -- over the last 20 years, that's where all the money's gone. It's one of the fastest growing fanbases in the world right now.

7) You mentioned you grew up in Alabama but you've lived here in LA now for quite some time. How was initial transition from Alabama to LA for you?
Well I had a few years in Chicago before moving to LA. I grew up for about half of my life in Alabama and the other half spent in Chicago. I moved from Chicago to LA. So I already was used to the big city. The big difference between LA and Alabama is obvious, I came from a very small world down there. The big difference between Chicago and LA is that, I think LA is not really LA. It's really a conglomerate of multiple cities. It's a huge metropolitan area that consists of many cities. People say I live in LA, but nobody really lives in LA. You're from Sherman Oaks or La Canada, the valley or the beachside. I love it here. I've been here a long time. I love driving around. I love the versatility. I love how all of the little cities have their own characteristics, their own paces. I love all of the different types of restaurants. It's a beautiful area to live.

Tickets and information on the NASCAR Toyota All-Star Showdown may be obtained on the Internet at www.toyotaspeedwayatirwindale.com or by calling (626) 358-1100.

TOYOTA Speedway at Irwindale is located at 500 Speedway Drive off of Live Oak Ave. and I-605, between the 10 and 210 freeways in Irwindale, Calif.

Paramount Digital Entertainment will release a Days of Thunder video game later this year, fans will have a chance to preview the game on Sony PlayStation 3 consoles in the Speedway’s expo area. Fans will also be able to enter a contest to win a Sony PlayStation 3, a copy of the game and a chance to play the video game against select NASCAR drivers competing in the Showdown race. The first 1,000 contestants will receive a DVD copy of the movie.