The Obama Administration is set to award California with $2.35 billion in federal passenger rail stimulus funds today, with most all going towards high speed rail. The money is earmarked for four HSR segments—locally to the Los Angeles to Anaheim alignment—and for upgrades to the Pacific Surfliner route between San Diego and San Luis Obispo.

"This award will go toward specific projects," explained Anaheim Mayor Curt Pringle, who is also the state's High Speed Rail Authority Chairman, "but it will benefit every single section of our planned high-speed rail system by moving this entire vision closer to reality - closer to being the first true high-speed rail system in the United States."

Beyond the L.A to Anaheim segment, the $2.25 billion for HSR will fund portions between San Francisco and San Jose and between Merced, Fresno and Bakersfield. Specifically, the money "will go toward environmental planning and the design and construction," according to the Mercury News. 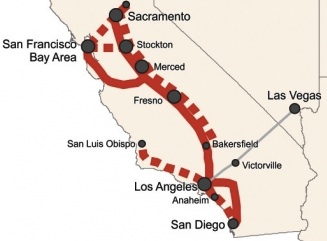 Graphic via The White House
When completed in 2020 (well, thats the projected date), the 520-mile first phase of the project will connect the Los Angeles region to San Francisco in under two hours and forty minutes. "California would be required to begin construction on at least one of the initial four segments by late 2012, and to have at least one segment in operation by 2017," noted the Wall Street Journal.

The second phase calls extending it to Sacramento and San Diego by 2026. The project's total cost is estimated around $43 billion.

"This is a major victory for the California high speed rail project," exclaimed Robert Cruickshank on the California High Speed Rail blog. "$2.25 billion, with $100 million for other passenger rail, is an unprecedented level of federal investment in California rail."

As for the Pacific Surfliner, "new track and crossovers will improve on-time performance and ultimately allow for top speeds of 110 mph on the segment connecting Los Angeles and San Diego," explained a White House press release.

"California has made signicant investments in passenger rail that have led to remarkable ridership growth," touted the White House. "Over 5.5 million people per year now ride on California’s three intercity corridors, making these routes the busiest in the U.S. after the Northeast Corridor."

In September, California submitted grants asking for as much as $4.8 billion in funding.