Make It Official: The Best Burger in LA 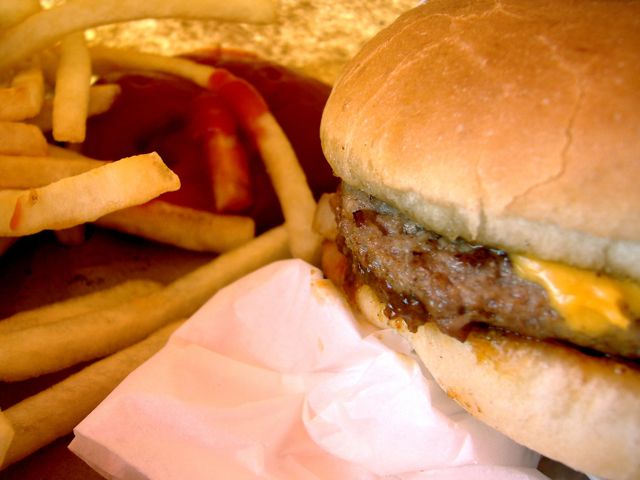 Not the best burger in LA. Sorry! Photo by ~db~ via LAist Featured Photos pool on Flickr

Before we really begin (but after you’ve already become enraged by the headline), let me say this: different people like different things. Toppings, bun, cooking method, texture, ingredients, ratios - all play a factor in determining the best burger in any given area. And to be sure, this single post won’t put the ‘Best Burger In Los Angeles’ debate to rest for you (even though our pick is absolutely correct) so don’t worry about being wrong when you criticize the list below. Who knows, maybe you get a real kick out of being wrong. Like we said, different people like different things.

Let us also say that this is no fly-by-night burger operation. Over the past half-year, burger correspondents Farley Elliott (feel free to address hate mail here) and Brett Morris have scoured every Yelp, Chowhound, Urbanspoon and Citysearch list to get the skinny on how to get fat, burger style. Then we went to food blogs, of which there are no shortages in LA, and then news pieces, opinion columns, Facebook, Twitter, Ask Jeeves, Angelfire, Geocities, and on into a web dimension so beefy it cannot be quantified. But we did it anyway. As much as possible we tried to stay LA-centric (and our research shows this), but were definitely not afraid to be influenced by recommendations for places in the South Bay, East LA, or even -gasp- the Valley. Eventually the list blossomed, from a top 10 must-try to a top 20 have-to’s, then a top 30 gotta’s, and ultimately over 40 necessary stops cluttered our ramshackle Google map. Six months later, with over 100 burgers apiece down the gullet and straight to our hearts, we present to you: The Best Burger In Los Angeles.

Simply put, there are two elementally different types of burgers: the ‘basic’ and the ‘gourmet’. Pub burgers, sloppers, Jucy Lucy’s, smash burgers, broilers, and ad nauseum (literally) all essentially fit into one of these two burger categories, and what separates the two is equally as essential. Basic burgers are cheap, at least a little messy, usually a thinner patty on a no-frills bun. Now, don’t get your brioche in a bunch and start screaming that toasted or buttered or seasoned or grilled buns go beyond ‘no-frills’, because again you’re wrong. For us, frills means brioche, french bakery, English muffin. That’s frills. A basic burger needs to be something you’d feel like eating standing up, with condiments dripping across a slice of tomato, oily cheese, and some 20 cent lettuce. And don’t forget the egg, please.

Gourmet burgers are a more subtle, refined beast - but don’t let the square plates and heavy silverware fool you, these things pack a gut punch. You’re likely to find a gourmet burger resting atop a fresh-made in-house flaky-crust bun with arugula and fontina cheese, caressed in some type of compote or aioli made from the sweat of the 10 foodservice engineers it took to broil this bad boy to perfection. Your thick-pattied gourmet burger is brimming with confidence about its beef blend or its aging or something, and even if you can’t see the hole yourself you know somebody stuck a thermometer in the middle to make sure it was just right. It’s a delicious beef monstrosity that will take a little bit of squeezing just to get it from top to bottom in one bite, but isn’t that the fun? Just imagine your new best burger buddy is Daniel Craig as Bond: dressed up nicely but a little too beefy to be contained in such a delicate package.

If anything, finding the best basic burger was a bigger challenge than the gourmet, because so many places come so close to getting it right. There are the old staples, like Pie N Burger in Pasadena, Apple Pan on the Westside, or Irv’s in West Hollywood. There’s a few BBQ joints that make the foray into the burger world, like Zeke’s or JNJ’s Burger Shack on Adams. Oinkster, Hinano, Hawkin’s House of Burgers are all a little off the grid from LA-central, but all put up great burgers that deserve the drive. Yet in the end, there could be only five.

5. Hamburger Habit, 11223 National Blvd., Los Angeles. A slightly surprising pick at first glance, as the Habit flies a bit under the radar. That is, until you get inside, where defunct 90’s websites proclaim them the top spot in Los Angeles. But as long as the thin, juicy patties and fresh toppings keep making it onto that bun, the future looks just as bright.

4. Apple Pan, 10801 West Pico Blvd., Los Angeles. It’s easy to see why Apple Pan is so beloved, they’ve been doing the same great things for years and years. Thin patties on soft-as-butter buns and enough lettuce to make your doctor think you’re eating healthy. The hickory burger is not to be missed.

3. The Oinkster, 2005 Colorado Blvd., Eagle Rock. A classic burger done the way it should be: medium patty, yellow cheese, and a sesame bun that isn’t afraid to take a beating. Get the double.

2. Capitol Burger, 4301 West Pico Blvd., Los Angeles. This tiny spot in a parking lot serves up burgers so good and so cheap you’ll wonder why you never stopped before. Thin patty, soft bun, and a winning ratio of condiments-bun-beef. Don’t be afraid to stand in line just because your order gets handed to you in a Bud Light box.

1. Hawkin’s House of Burgers, 11603 Slater Street, Watts. Hands down the best basic burger in Los Angeles. The meat is juicy, greasy, delicious and plentiful. Good luck putting down a double once you’ve picked it up, the mess and the taste won’t let you.

Gourmet burgers live and die by their reputations, so we’re sad to say we’ll have to break a few hearts on this list. But at upwards of $13-$18-$24 a pop with a side of fries, you’d better be able to patty up something special. Our overall list of gourmet spots was lined up with accolade burgers, waiting patiently to receive top billing on our list. Father’s Office, Umami, and The Counter are all heavy hitters in the LA burger scene, but at least one of these didn’t make the top five. Other well-received spots include CommeCa (which the New York Times said is possibly the best burger in America), Bowery, 8 oz. Burger Bar, BLT Steak, and Golden State, while 25 Degrees started high before falling off the top five in the ultimate rankings, thanks to a few surprises.

5. Oaks Gourmet, 1915 North Bronson, Los Angeles. This is no less a shocker to you than it was to us, but the fact remains: Oaks Gourmet is new in town, but they’ve got the absolute goods. Their dry age burger is not only bountiful, it’s got the gourmet pedigree you’ll be surprised to find at such a small mini-grocery. From the perfect bacon to the arugula and jalapeno/pineapple compote, the new guys are here to make a statement.

4. Umami Burger, 850 South La Brea Ave., Los Angeles. Undoubtedly the most hyped burgers of 2009, these guys let their expanding (from one location to 4, plus a truck) do the talking. That is, along with their simple but elegant creations. These babies are as juicy as they come, with unique combinations that let you have your fried cheese and eat it too. Getting a few of these medium-sized bad boys and Round-Robin’ing them with some friends is always the best way to go here.

3. CommeCa, 8479 Melrose Ave., West Hollywood. The New York Times isn’t far off when they say this burger is ‘perfection’, and if burgers were just the patty itself they may be right - a better bunch of burger beef is not to be had in this city. You may not be in love with the cole-slaw like topping (no tomato) or the unwieldy height of the damn thing, but you have to love how it goes down.

And the winner is...

1. The Foundry on Melrose, 7463 Melrose Ave., Los Angeles. If you said Father’s Office, you’re simply wrong, but not by much at all. We went back and forth, several days in a row, but ultimately the Foundry crafted the perfect Father’s Office killer. Condiments and compotes arrange themselves along an open-faced perfection patty, asking politely for you to take as much or as little as you please. The meat is a show-stopping blend, giving the burger a soft composition with unfathomable taste and texture. And all this is held in by the coup de grace: four Hawaiian sweet rolls sliced lengthwise and lightly toasted as your bun.

So there you have it, the best burgers in Los Angeles. A full list of all the places we visited seemed too long to list here, so suffice it to say ‘we went there’ when asking yourself if we really scoured LA. If you’ve really got (go on, let’s say it together) ‘beef’, feel free to take it up in the comments section, and we’d be more than happy to tell you why you’re wrong.